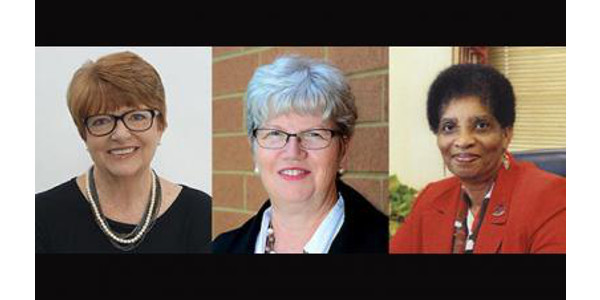 Marsha Herndon Purcell, Cherie Lynn Mingus and Retia Scott Walker will be the newest members of the HES Hall of Fame. (Courtesy of University of Kentucky)

LEXINGTON, Ky. — Three women with long, distinguished careers are the newest members to be inducted into the University of Kentucky School of Human Environmental Sciences Hall of Fame.

The school is part of the UK College of Agriculture, Food and Environment, and each year it honors those who have positively impacted their profession, communities and the school. This year’s inductees, Cherie Lynn Mingus, Marsha Herndon Purcell and Retia Scott Walker were inducted during a ceremony Sept. 15 at UK’s Hilary J. Boone Center.

“We are pleased to honor three inductees this year who have each had a lifetime of achievements and contributions,” said Ann Vail, school director. “While each is different, all three have impacted the school and our profession in meaningful ways. We are grateful to each of them.”

After graduating from UK in 1976, Mingus began her teaching career in Hardin County. She educated numerous students during her 37-year career. She also co-advised the school system’s chapter of Family, Career and Community Leaders of America. During her career, she received numerous awards for her innovative teaching techniques from many organizations.

Purcell received her bachelor’s and master’s degrees from UK in 1973 and 1975. Her first position after graduation was as a UK extension clothing specialist, which she held from 1975 to 1977. She left to become the director of women’s programs for Kentucky Farm Bureau. While there, she played an important role in developing the Kentucky Market Basket Survey, which continues to offer the mostly highly respected food pricing data in Kentucky. In 1980, she joined the American Farm Bureau Federation, which started her 34-year career with the organization. During that time, she rose through the ranks to become director of membership and program development. She provided leadership for numerous programs including the development of “The Great American Farm” exhibition at Walt Disney World’s Innoventions at Epcot.

Walker is known for her career as a higher education administrator. She began in higher education at Texas Women’s University and then moved on to be department chair at the University of Maryland Eastern Shore. She was dean of the UK College of Human Environmental Sciences from 1994 to 2002 and UK’s vice president for academic outreach and public service from 2002 to 2005. She retired from UK in 2005 but returned to higher education in 2011 as the executive assistant to the interim president at the University of Maryland Eastern Shore. She also served as that university’s interim provost and vice president for academic affairs from 2012 to 2013.

Walker has held many national leadership positions in professional organizations including president of the Association for Gerontology and Human Development. She has received numerous awards including the Distinguished Service Award from the American Association of Family and Consumer Sciences.