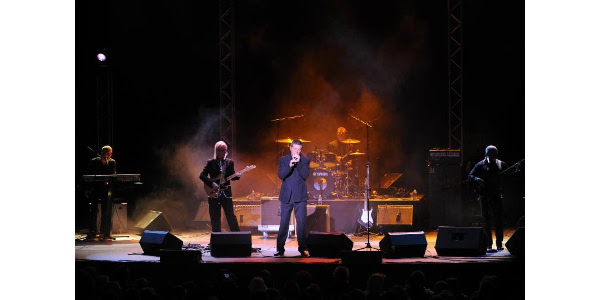 SPENCER, Iowa — The Clay County Fair is excited to announce an evening of rock ‘n roll featuring Herman’s Hermits starring Peter Noone with special guests The Grass Roots and The Buckinghams in the U.S. Cellular Grandstand at the 2017 Clay County Fair on Sunday, September 10 at 7:30pm.

“Our goal each year in the U.S. Cellular Grandstand is to provide something for everyone,” said Fair Manager Jeremy Parsons.  “We know many of our fairgoers will enjoy this night of music as they step back in time to the 1960s.”

Herman’s Hermits starring Peter Noone sold over fifty-two million recordings.  Noone himself is a multi-talented entertainer, who has been delighting audiences nearly all his life.  At the age of fifteen, Noone achieved international fame as “Herman,” lead singer of the legendary pop band Herman’s Hermits. His classic hits include “I’m Into Something Good,” “Mrs. Brown, you’ve Got A Lovely Daughter,” “I’m Henry VIII, I Am,” “Silhouettes,” “Can’t You Hear My Heartbeat,” “Wonderful World,” “Just A Little Bit Better,” “There’s A Kind of Hush,” “A Must To Avoid,” “Listen People,” “No Milk Today,” “The End of the World,” “Leaning On A Lamp Post,” and “Dandy”. In all, fourteen singles and seven albums went Gold.

One of the most beloved and respected Chicago bands ever to explode onto the national scene, The Buckinghams’ live concerts pack power into ’60s pop rock. Bringing back great memories with their chart-topping ’60s hits, including “Don’t You Care,” the soulful “Mercy, Mercy, Mercy,” and the national anthem of teenage love, “Hey Baby, They’re Playing Our Song.”

Since their formation, The Grass Roots have charted 29 singles – 13 of which went Gold, followed by 2 Gold albums and 1 Platinum album. In the entire history of rock n’ roll, only nine bands (including The Beatles) have charted more hits on Billboard’s Hot 100 than The Grass Roots. For almost 50 years, one of the most recognized groups on “Classic Rock” stations has continued to be The Grass Roots.

Tickets will go on sale Thursday, March 16 at 10:00am. Prices are $30 (general admission stage front standing), $25 (reserved Grandstand seating), and $20 (general admission bleacher seating). Tickets will be available online at www.claycountyfair.com, by phone at 515-244-2771, or in person at the Clay County Regional Events Center Box Office. There will be no additional fees applied to any of these purchase methods.

About the Clay County Fair
“Come Home” September 9-17, 2017 to Spencer, Iowa for our Centennial Celebration! “The World’s Greatest County Fair” since 1917, the Clay County Fair attracts more than 300,000 guests each September. “Come Home” for unique experiences including world-class Grandstand entertainment, award-winning fair food, daily livestock and horse shows, more that $150,000 in free entertainment, thousands of competitive exhibits, the thrilling GoldStar Amusements Midway, hundreds of commercial vendors, and the largest farm machinery display at any fair in the United States. Visit claycountyfair.com to plan your visit.