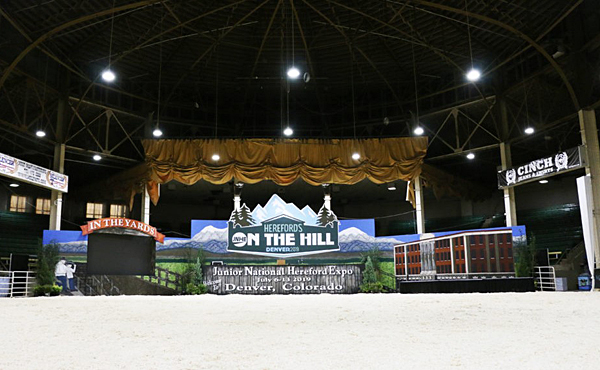 DENVER — The 2019 VitaFerm® Junior National Hereford Expo made history as the last youth exhibition to be hosted in Stadium Arena at the National Western Stock Show facility in Denver, July 6-13. The event was hosted by the National Junior Hereford Association, the Hereford Youth Foundation of America and several host state Hereford associations including Oregon, Washington, California-Nevada, Idaho, Wyoming and Colorado.

This year’s JNHE showcased the talents of NJHA members both in the showring and in various contests. Bailey Clanton, the national shows coordinator and youth activities assistant for the American Hereford Association, emphasized how the activities and family atmosphere of this year’s JNHE truly made Hereford’s time on the Hill historic.

“The 2019 JNHE was a great opportunity for all of our exhibitors to experience the National Western Complex and show in Stadium Arena,” said Clanton. “Not only did the western states do a great job hosting a JNHE closer to home, but the entire junior membership made history as the last group of exhibitors to compete at a junior national held in Stadium Arena. Looking ahead decades from now, I think our young exhibitors are going to realize how monumental Herefords on the Hill was.”

An impressive 1,179 entries were exhibited at this year’s JNHE. These entries represented more than 800 exhibitors from 38 states and Canada.

“An event of this magnitude takes many, many teams working together and it is so rewarding to see this teamwork produce what I would consider the best Junior National Hereford Expo to date,” said Amy Cowan, AHA director of youth activities and foundation. “History was definitely made as NJHA members exhibited their Hereford genetics and hard work in Stadium Arena and even got to tie out in the Yards. Our gracious sponsors, the Western States Host Committee and the National Western Stock Show put their best foot forward for exhibitors and their families as we showcased Herefords on the Hill and the 2019 JNHE became a part of the National Western’s iconic history.”