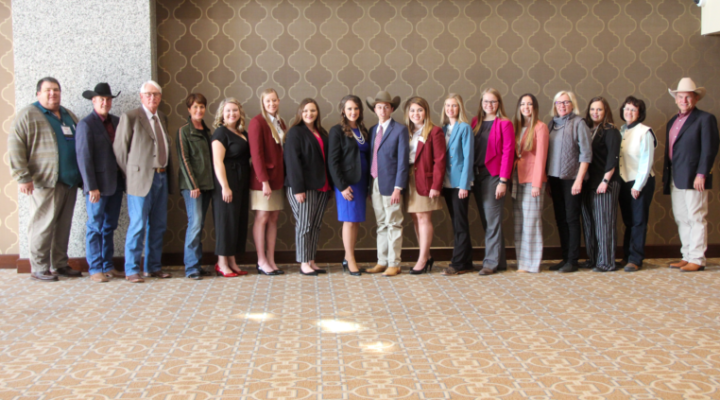 The Vanier Family of CK Ranch in Brookville, Kan., donated 10 scholarships totaling $100,000 to youth who demonstrate a commitment to higher education and who have overcome obstacles in their lives. (Courtesy Photo)

The Vanier Family of CK Ranch in Brookville, Kan., donated 10 scholarships totaling $100,000 to youth who demonstrate a commitment to higher education and who have overcome obstacles in their lives.

Rachael Bagnell, Slater, Mo.
Rachael is a sophomore at the University of Missouri-Columbia, majoring in agricultural education. The 19-year-old daughter of Bob and Tonya Bagnell is currently serving as the president for the Missouri Junior Hereford Association. Along with being a member of the University of Missouri’s Block and Bridle and Collegiate FFA, Rachael still assists her parents on their purebred Hereford operation. She hopes to pursue a master’s degree after the completion of her bachelor’s.

KC Barnes, Hulbert, Okla.
KC is currently a graduate student at the University of Arkansas, pursuing a master’s in agricultural economics. The son of Kent and Diana Barnes was on the Oklahoma State University (OSU) meat judging team during his undergraduate career. He also served as president for the Oklahoma Junior Hereford Association and past secretary for the American Farmers and Ranchers Collegiate Farm Bureau.

Hattie Duncan, Wingate, Ind.
Hattie is a sophomore at the University of Illinois at Urbana-Champaign, majoring in animal science. The 19-year-old daughter of David and Jill Duncan currently works in the beef nutrition lab on campus, assisting graduate students with their projects. Hattie has grown up raising Hereford cattle. She hopes her future career allows her to make a positive impact on the beef industry.

Blakelee Hayes, Ada, Okla.
Blakelee is currently a sophomore at Oklahoma State University, where she is studying animal science with a focus on animal nutrition. Blakelee is the daughter of the late Jeff and Jennifer Hayes, and she has been showing cattle at the local, state and national levels since 2008. She is a member of the Oklahoma Junior Cattlemen’s Association and the NJHA.

Montana Lawrence, Princeton, Minn.
Montana is a political science and studio art major at the University of Minnesota-Morris. The 21-year-old daughter of Bryan and Marytina Lawrence currently serves as a board member for the NJHA. For Montana being a board member has given her the opportunity to inspire and positively influence fellow NJHA members. While in college, Montana recognized the need for agricultural representatives throughout the political system, which has led her to pursue a law degree once she has finished her bachelor’s degree.

Taylor Belle Matheny, Mays Lick, Ky.
Taylor Belle is the 22-year-old daughter of Andrew and Suzanne Matheny. She is currently a graduate student at Texas Tech University, studying agricultural communication and is the chairman of the NJHA. During her time earning a bachelor’s degree at Kansas State University, Taylor Belle was very active on campus and served as an ambassador for the College of Agriculture. This position allowed her to interact with prospective students and ultimately led her to discover her passion for student recruitment and finding her assistantship at Texas Tech.

Dixie Miller, Lincoln, Ark.
Dixie is a junior studying animal science and agricultural communications at the University of Arkansas (U of A). She is the 21-year-old daughter of Christy Westlin. Dixie has been an active member of the NJHA and has served as an ambassador for JNHE and has attended the Faces of Leadership Conference. Dixie was selected as the 2019 Hutchinson Community College Young Female Kansan of the Year while she finished up her junior college livestock judging career. During her time a U of A, she is serving as an office assistant for the animal science department.

Katie Nolles, Bassett, Neb.
Katie is the daughter of Mike and Trudy Nolles. She is an agricultural education major at the University of Nebraska-Lincoln, completing her student teaching at this time. She has served as a National Hereford Queen and a past Nebraska State FFA vice president. Katie plans to pursue a master’s program in school counseling or curriculum design. With her degree, she hopes to inspire the next generation of agriculturists and is excited to serve students in rural communities.

Abbygail Pitstick, South Solon, Ohio
Abbygail is currently attending Wilmington College and is the daughter of Neil and Elizabeth Pitstick. The 19-year-old sophomore is majoring in animal science. While at school, she maintains an integral role in her family’s cattle operation. Abbygail served as the 2018 National Hereford Queen and recently interned with The Showtimes magazine for its Blackout 7 show. Abbygail plans on furthering her education and pursuing a master’s degree in animal nutrition.

Peyton Schmitt, Birmingham, Iowa
Peyton is a student at Iowa State University, majoring in agriculture and life sciences education with a communications option. The 21-year-old daughter of Ron and Karin Schmitt is passionate about sharing the story of agriculture with consumers and hopes to serve as an advocate for the agriculture industry. This passion led Peyton to a position with the Coalition to Support Iowa’s Farmers as a communications intern.