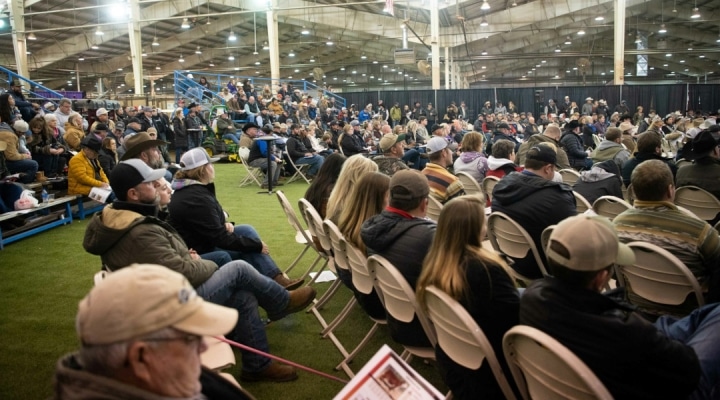 KANSAS CITY, Mo. — A standing room only crowd filled the Super Barn Sale Arena for the Hereford Night in OKC National Hereford Sale held in Oklahoma City during the second annual Cattlemen’s Congress, Jan. 7.  After the final strike of auctioneer Cody Lowderman’s gavel, the sale grossed $801,750. The excitement from breeders and buyers was a true testament to where the Hereford breed is progressively headed moving forward.

With the Hereford Youth Foundation of America (HYFA) in mind, T/R Cattle Company, Glencoe, Okla., consigned Lot 27 T/R Miss Shelby J43 ET a daughter of UPS Sensation 2296 ET and high selling heifer of the Hereford Night in OKC. GKB Cattle purchased this sought after lot for $60,000 with half of the proceeds being donated to HYFA.

“We would like to extend a big thank you to the consignors who brought elite genetics to the national Hereford Night sale in OKC,” says Joe Rickabaugh, AHA director of field management and seedstock marketing. “The sale gross and averages prove the consignors bring sought after offerings year after year proving the strong demand for the Hereford breed. We greatly appreciate the buyers and sale attendees who continue to support this event.”

SCN Coalition honored by the Public Relations Society of America
May 24, 2022