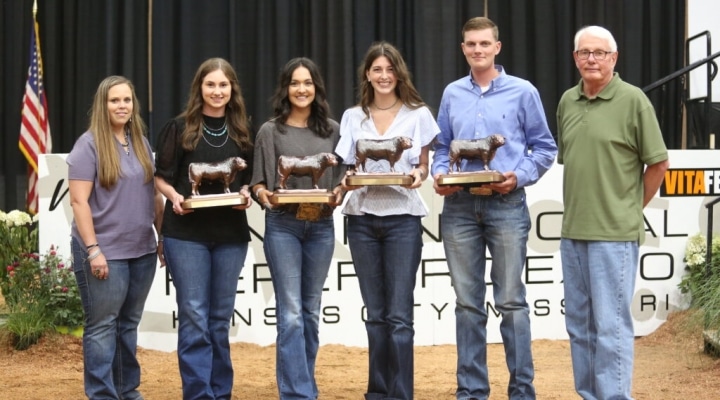 KANSAS CITY, Mo. — Four outstanding Hereford youth were awarded the Golden Bull Achievement award during the 2021 VitaFerm® Junior National Hereford Expo (JNHE) in Kansas City, Mo., at the Hereford Spectacular Scholarship and Award Ceremony on July 8. The Hereford Youth Foundation of America and the National Hereford Women awarded $28,000 alone at this year’s JNHE, and will award a total of $200,000 in 2021 to deserving junior members to aid in their academic endeavors. The Golden Bull Achievement Awards are given to four collegiate students each summer. This is one of the most coveted honors at the JNHE as these youth not only receive a bronze bull, but they also receive a $2,000 scholarship to assist with the education.

The following are the 2021 Golden Bull Achievement Award winners.

Megan is a first-year master’s student at Kansas State University with a bachelor of science in animal sciences and industry pursuing a master’s of science in agriculture education and communication, with the goal of becoming the communications and marketing director for a livestock company. Her involvement in the Hereford breed and the National Junior Hereford Association has led to establishing a career interest in the beef industry and continued passion for raising cattle throughout her adult life.

Trevor is a freshman at Butler Community College working to attain an associate’s degree in agriculture business with the intent of pursuing a bachelor of science in agriculture business with a minor in animal science. Post college he would like to gain industry experience at the commercial feedyard level before returning home to work on the family’s diversified seedstock and row crop operation and eventually operate a feedyard of his own. He owes the Hereford breed credit for shaping him as a person, agriculturalist and next generation beef producer and plans to give back to the organization and industry throughout life.

Audrey is a freshman at Texas A&M University pursuing a degree in architecture and construction science with the goal of growing and learning how to build her own construction firm that specializes in hospital construction or green space areas. She looks forward to continuing to raise her own family in the Hereford breed and in the association, making time for the beef industry in her daily life.