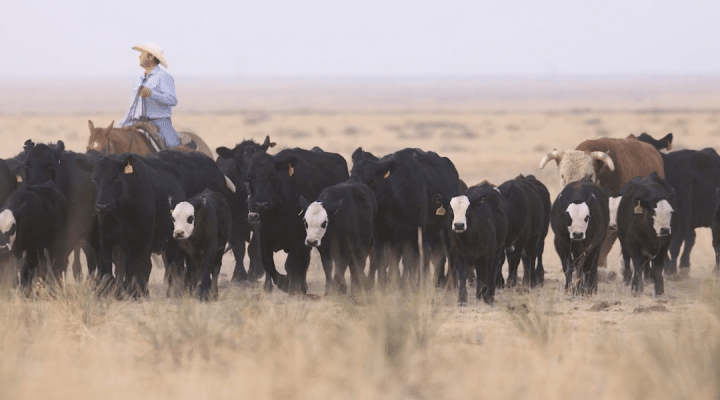 In the Southwest, where rainfall is scarce and feed costs are climbing, ranchers and feeders prefer calves that gain weight more efficiently, like Criswell’s F1 cross cattle. (Courtesy Photo)

KANSAS CITY, Mo. — Summer droughts. Limited resources. Only the most resilient cattle make it through such harsh challenges. Roy Lee Criswell of Pep, New Mexico trusts Hereford-cross cattle to do it best.

“These Hereford Bulls on these black cows, getting that F1 cross, is putting more feed efficiency along with more hybrid vigor into these calves,” Criswell says. “The longevity of these bulls is in their feet. They don’t break down. Out here in this desert country, they’ve got to have good feet to be able to travel. Getting on top of these cows and coming off on these rocks, we need these bulls to keep going. We don’t want them to need a lot of feed to get them to breed back.”

In the Southwest, where rainfall is scarce and feed costs are climbing, ranchers and feeders prefer calves that gain weight more efficiently, like Criswell’s F1 cross cattle.

“At the end of the day, the yield grades are a lot higher, which is more beneficial to our pocket and our feeding operation at the yard,” says Chris Adkins of Adkins Cattle Co. “When you get higher yields and better quality carcasses, you get dividends. Here we are, seven months later and they’re weighing 1,350 and 1,400 pounds. That’s what’s fun — when you drive by their pens every morning and see the growth in them.”

Black baldy cows consume two pounds less of voluntary forage intake per day than straight-bred black cows. That’s according to an Oklahoma State University study that shows a $50 savings per cow, per year.

“They’re the easiest to work with, the easiest to get on feed, and they’re probably some of the best converting cattle,” Adkins says. “And if you can keep them calm and laying down, especially in times like these where it’s 101 degrees, they’re just going to continue to convert feed and gain. And man, it pays on the back end.”

Hereford Genetics Sustain Through the Dry Season from American Hereford Association on Vimeo.

AFR Cooperative delegates to lobby on behalf of membership