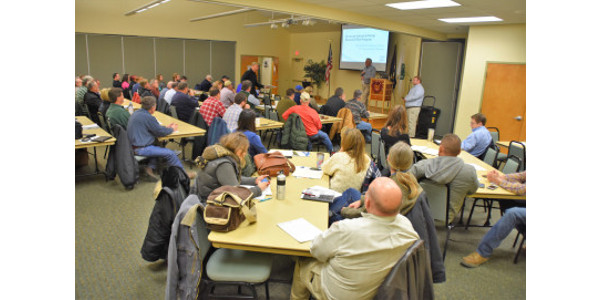 (First Appeared in the Feb. 23 issue of The Farmer’s Pride)

FRANKFORT — Recent seminars in Christian, Clark and Shelby counties on the basics of hemp production drew considerable interest, according to Tom Keene, an agronomy specialist who focuses on hemp and forages for the University of Kentucky College of Agriculture, Food and Environment.

Keene says the geographic diversity of the meetings reflects the interest in industrial hemp production across the state.

“In 2016, according to Kentucky Department of Agriculture statistics, hemp was produced in 60 of the 120 counties and they pretty much stretched from east to west and north to south.”

“This is a chance for folks that may not be in the program currently that are interested in looking (at hemp) long-term as another part of their rotation on their farm,” notes Brent Burchett, director of the Kentucky Department of Agriculture’s Division of Value-Added Plant Production. “We’ve also seen a lot of new people to agriculture come due to an interest in industrial hemp, so we’re excited about that.”

Topics on the agenda included hemp marketing, hemp agronomics, the KDA’s Industrial Hemp Research Pilot Program and KDA policies. “We go through KDA’s rules, the hemp program operations, a little bit of the long-term aspects of the industry, some of the uncertainties we’re dealing with and some of the challenges of growing so fast, so quickly,” Burchett added.

“Commissioner (Ryan) Quarles has said he is committed to looking at all the aspects of the industry and the plant,” Burchett continued.

Historically, hemp was grown in Kentucky for products like rope and ship sail material prior to World War I. Following the second world war, availability of inexpensive synthetic fiber further discouraged the growth of the crop.

“We shouldn’t presume that we’re going to have the same types of industries that our grandads did,” Burchett observed.

Burchett says the Department is excited to have approved 12,800 acres for inclusion in the pilot program this year, up from 4,600 acres in 2016.

Both Burchett and Keene stress that this is still a heavily regulated and monitored project. Not just anyone can go out and plant a field of hemp.

Burchett stresses that it’s a serious undertaking to import seed and check it in with KDA before growers receive it. When planted, producers must submit the exact GPS coordinates for the crop.

“So, imagine, 12,800 acres will have to be physically visited by the Department staff this year,” Burchett said.