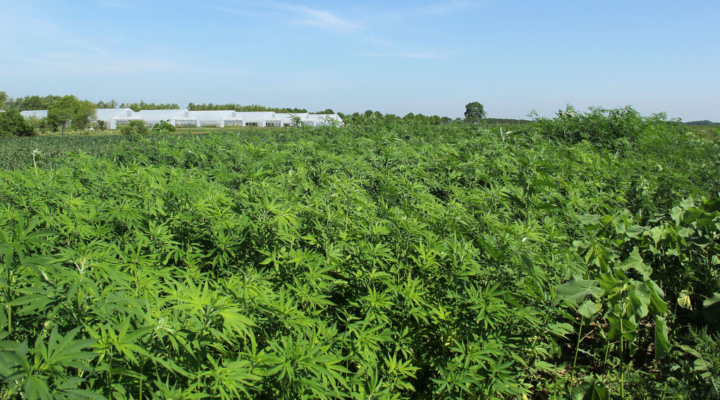 The Office of Indiana State Chemist (OISC) is warning the public about predatory hemp seed vendors known to be currently active in the state. (Photo courtesy of Kevin Gibson)

WEST LAFAYETTE, Ind. — The Office of Indiana State Chemist (OISC) is warning the public about predatory hemp seed vendors known to be currently active in the state.

This year marks the first time hemp will be grown in Indiana as a commercial crop, not a research crop, said Donald Robison, OISC seed administrator. That means that the number of hemp growers around the state is increasing and so, too, are reports of faulty seed and untrustworthy vendors.

In some cases, Robison said, people are paying for seed and the product is never delivered. In other cases, the product doesn’t match what is promised by the label. With hemp especially, this can be a problem as many buyers end up with a marijuana, not a hemp, crop.

“The legal limit for THC (one of the psychoactive properties of marijuana) in hemp seed within Indiana is 0.3%,” Robison clarified. “We saw a situation recently where the buyer thought he was buying and growing hemp, but instead he grew a crop with 17% THC.”

In this instance, the state police became involved, and seized and destroyed the crop. Any vendor selling to customers in Indiana, whether the company is based in the state or not, must abide by the Indiana Seed Law, which requires companies to obtain a seed permit. Securing this permit also means the seller agrees to abide by state regulations regarding seed labeling.

“Securing a permit means you agree to have your seed tested to ensure what is reported on the label is accurate,” Robison said. “This means the seed is tested for percent purity, percent noxious weeds, percent germination and, in the case of hemp, percent THC.”

Robison recommended those interested in growing hemp buy only from this list. While it is legal to buy from non-permitted suppliers, the consumer receives fewer protections.

“If they use and buy from the list and something goes wrong, we can help protect them,” Robison said. “That’s what we’re here for. If the seed label is inaccurate, but the seller has a permit, we can go through arbitration and help both sides reach a settlement. Alternatively, if a farmer is stealing genetics from a supplier or doesn’t pay their bill, we can help protect the supplier.”

Robison urged those planning to purchase from suppliers without a permit to inform OISC of the vendor they use and if any issues arise.

“We also want to know if there are problems with permitted suppliers,” Robison said.

Since hemp and those growing it are no longer protected by its status as a research crop, Robison explained the fallout from cultivating faulty hemp seed could be more severe than in years past.

“If the crop is ‘hot,’ containing over the legal limit of THC, there are a lot more legal issues that are going to arise,” he said.