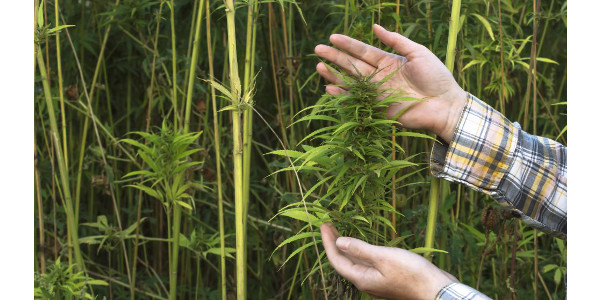 This year, North Carolina will have its first hemp crop in decades, and NC State research and extension work will help shape the crop's future here. (Courtesy of NC State University)

NC State will begin planting the crop this week at several research stations across the state. The goal, said crop scientist Keith Edmisten, will be to answer a wide range of basic questions – from when to plant, how to plant, which varieties do best, which pests affect the crop here, how much fertilizer to use and how to harvest and dry it.

The research is important, Edmisten said. North Carolina was once a leading hemp-producing state. But the crop hasn’t been grown here for decades, because it was outlawed. (Hemp comes from the same plant species as marijuana, but what makes hemp different is its low levels of tetrahydrocannabinoids, the primary psychoactive constituents of marijuana. By law, hemp must have a THC level of 0.3 percent or less.)

“There’s very little we actually know about growing hemp in North Carolina,” Edmisten said. “So we have lots of questions to answer. Some of the research goals are agronomic, and some of them are economic, in terms of production costs versus what they are able to sell it for.”

The growing season is getting off to a later start than agronomists had hoped, Edmisten said, because of legal questions about obtaining seeds. The state’s attorney general recently gave the hemp commission the green light to license farmers who wanted to order seeds from other states, and this was the last hurdle the university faced in starting their research program.

Other key NC State scientists involved with the testing include Angela Post, a small grain specialist; Lindsey Thiessen, a plant pathologist; and Jeanine Davis, a horticultural scientist based at the Mountain Horticultural Crops Research Station in Mills River.

Growers Across the State Show Interest

Edmisten said growers in all parts of the state have expressed interest in the crop. Growers in the east and piedmont regions are generally looking to grow the crop for its fiber and its seeds. Meanwhile, growers in the mountains tend to be interested in growing it for compounds called cannabinoids, which have been associated with health benefits.

To gather results that will be helpful to producers statewide, Edmisten and his colleagues will be conducting their studies at several agricultural research stations. That will allow them to see how the crop performs in different soil types and in different climates.

They’ll be testing six varieties from Canada and two from Europe. “Planting dates may vary by variety, and we expect some varieties will be more suited to fiber versus seed production,” Edmisten said.

As NC State and N.C. A&T State work to build their knowledge of hemp production and marketing, Edmisten encourages farmers who are growing hemp this year to proceed with caution.

“We have encouraged growers not to risk their farms on this – plant a little bit, experiment with it, and see how to grow it and how it fits into your operation,” he said.

Right now, he added, “there’s some misinformation out there that it doesn’t have pests and that it doesn’t require fertilizers, but a couple of us have been to Kentucky and to Canada, where it’s been legal to grow for about 20 years. We looked at hemp farms and hemp research, and we saw that it does respond to fertilizer and it does have pest problems.” Among those pest problems is the disease sclerotinia, which also affects peanuts and soybeans.

To counter the misinformation, NC State Extension has developed an online portal with links to trusted sources of information about industrial hemp production.

“Hemp is not a super crop,” Edmisten concluded, “but it is an intriguing alternate crop for growers that they can use to manage risk and to expand their rotation options.”