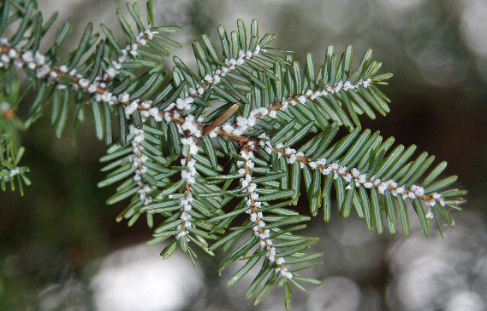 HWA first arrived in New York in the 1980s and has since been found in 43 counties. Infestations most likely arrived via infested nursery stock. (Courtesy Photo)

HWA is an invasive forest pest from southern Japan that decimates native populations of the Eastern hemlock tree. It is most apparent as white, woolly puffballs clumped near the base of needles along hemlock twigs. Its damage to hemlock trees in southern U.S. states has been immense and, as this insect pest has moved north, New York’s hemlocks are at risk.

Eastern hemlock is New York’s third most common tree species and a foundation species in our forests. Hemlocks are important for maintaining healthy wildlife habitats as well as human interests such as clean fresh water resources and their loss would drastically change our landscape.

HWA first arrived in New York in the 1980s and has since been found in 43 counties. Infestations most likely arrived via infested nursery stock. HWA has caused considerable damage to hemlocks on Long Island, and in the Lower Hudson region and southern Catskills. Infestations have been found throughout the Finger Lakes region and in 2017 the first HWA sighting in the Adirondacks was reported. Through research, management, and help from citizen scientists, we hope to slow the spread of HWA, reduce its impact, and implement an effective biocontrol management strategy.

Join us as we welcome Charlotte Malmborg, Education and Outreach Technician with the New York State Hemlock Initiative, Cornell University Department of Natural Resources, who will discuss this invasive pest and ways you can help to monitor for it and protect your trees.

The workshop is free but registration is requested. Call Seneca County CCE at 315-539-9251 to register, or register online at https://reg.cce.cornell.edu/HWA_245.