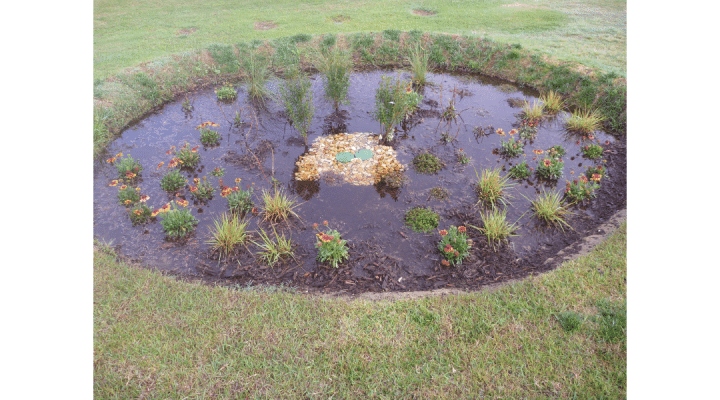 A bioretention cell at the Auburn University Sports Surface Research Unit receiving storm water from an adjacent building. Bioretention cells help rain soak into the ground instead of carrying pollutants to local waterways. They are an inexpensive way to keep our waterways clean and recharge our groundwater supplies. (Credit: Eve Brantley)

WASHINGTON — “When it rains, it pours.” This phrase is meant to mean that bad news comes in waves. Unfortunately, that’s true with real rain, too. While rain is usually welcome for various reasons, in developed area like cities and towns, it can produce a big problem: polluted runoff.

Wherever rains lands on traditional human-made surfaces, it can’t soak into the ground. Instead, water from large areas like streets, driveways, and roofs collects, looking for lower ground. To deal with this runoff, cities have developed complex stormwater control systems. Eventually, the water is routed to a stream or lake. This runoff, though, can become contaminated in its travels, which risks the pollution of essential waterways.

In addition to hurting waterways, none of the runoff water helps recharge groundwater. Because many people rely on groundwater for drinking water, this can become a big problem. This is where green infrastructure practices come in. These structures collect stormwater and let it soak into the soil naturally. Bioretention cells are a popular example of green infrastructure for improving stormwater at a large scale, and rain gardens on a residential scale.

“The first goal of green stormwater infrastructure measures is to allow stormwater to filter into the ground on-site so that it contributes to groundwater recharge,” says Thorsten Knappenberger, a professor at Auburn University. Knappenberger recently conducted a study on how to make these structures better.

The study focused on two main ways to try and improve bioretention cells. One was to ensure water soaks into the soil at an optimum rate to treat pollutants. The other focus was to increase how many pollutants the cell can trap. Excess nutrients from fertilizer and heavy metals are especially worrisome when they runoff into water bodies. These contaminants decrease water quality, which is a big issue for surface water and groundwater that people drink. If a cell can hold onto and transform these contaminates, it protects water quality.

To try and improve these metrics, Knappenberger tested a material known as zeolite. This mineral is made of aluminum and silicon that traps toxic chemicals. Knappenberger replaced some of the sand in the rain gardens with zeolite and measured how well the material performed.

Not surprisingly, zeolite held onto contaminates like ammonia and copper. But because the existing formula for bioretention cells is already efficient at trapping these materials, zeolite didn’t make a significant improvement. Zeolite also reduced the amount of nitrate leaving the cells. “Nitrate is a compound that is not typically held or retained by soil, so it was surprising that the nitrate retention was higher with added zeolite,” says Knappenberger. At the same time, zeolite tended to increase how quickly water could soak into the ground, which is a big plus. The findings could help communities design more effective bioretention cells.

While scientists like Knappenberger work to make green infrastructure practices better, readers may wonder what they can do to help. Be mindful about what is flushed down the storm drain, he says.

“Many people still think that the stormwater which enters a storm drain is treated in a wastewater treatment plant. But for the vast majority, the stormwater goes directly into a surface water body,” says Knappenberger. “This means that if you wash your car in your driveway, for example, the contaminated water with soap, oil, and grease will drain into a storm drain and might end up in the next creek.”

The Soil Science Society of America’s (SSSA) blog, Soils Matter, has other tips on what homeowners can do to keep our water bodies clean. 2022 marks the 50th anniversary of the US Clean Water Act, and SSSA has collected more information here.