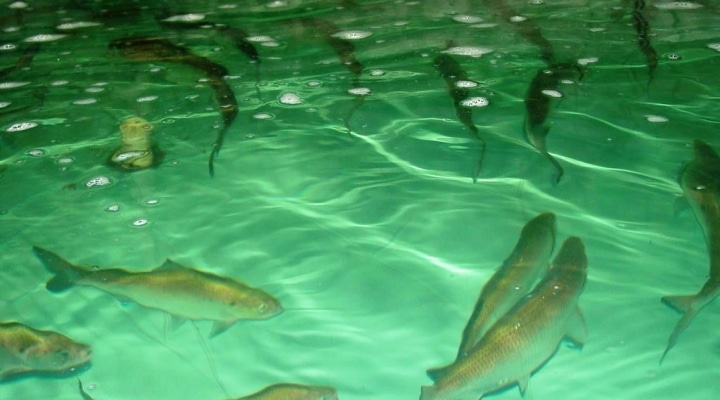 Delaware Sea Grant’s Ed Hale has been conducting seine net surveys of Wilmington’s Brandywine Creek every two weeks since mid-July, engaged by a coalition of groups supporting the removal of the waterway’s dams up to the Pennsylvania border. (photo by USFWS Fish and Aquatic Conservation, Creative Commons/flickr.com)

NEWARK, Del. — Delaware Sea Grant’s Ed Hale has been conducting seine net surveys of Wilmington’s Brandywine Creek every two weeks since mid-July, engaged by a coalition of groups supporting the removal of the waterway’s dams up to the Pennsylvania border.

The main non-profit spearheading the work, Brandywine Shad 2020, wants to restore the creek as spawning habitat for the American Shad (Alosa sapidissima), which is an anadromous fish, meaning it lives much of its life in the ocean but returns to freshwater habitat to spawn. Juvenile shad grow in the rivers and creeks from Florida to Nova Scotia before heading out to sea, protected from marine predators when they are at their most vulnerable.

For centuries, the 11 dams between the creek’s confluence with the Christina River and the Pennsylvania state line have effectively confined any shad to the small section of creek below West Street, where the first dam blocked passage upriver. In 2018, riverine residents Hunter Lott and Jim Shanahan of Wilmington established Brandywine Shad 2020 to try to change that.

Jerry Kauffman is the director of the University of Delaware’s Water Resources Center and one of the driving forces behind the initial research for Brandywine Shad 2020 showing what would be possible in a dam removal project. He said it makes sense that opening up new sections of the creek would provide more habitat and eventually lead to larger populations of shad.

“The more area of the creek that you open up, the more spawning production there is going to be, meaning the fish population is going to grow,” Kauffman said. “But you never know until you actually catch the fish.”

Which is where Hale, aquaculture and fisheries specialist for Delaware Sea Grant (DESG), comes in. DESG brings an objective, scientific approach to evaluate the best ways for communities throughout the state to support their coastal environment and the people who benefit from healthy waters.

Hale received a doctorate in marine bioscience from UD’s College of Earth, Ocean and Environment in 2012 before following his career in fisheries management to the Atlantic States Marine Fisheries Commission, the Delaware Department of Natural Resources and Environmental Control, and elsewhere before returning to the University in his current role at Sea Grant. His expertise and DESG’s commitment to scientific research made him a good fit to evaluate the impact of the Brandywine Shad 2020 group’s first dam removal, of the West Street Dam, in the fall of 2019.

Hale worked with Dewayne Fox at Delaware State University to develop a comprehensive proposal to study the life cycle of American Shad in the Brandywine Creek, a plan that convinced project leaders he was the right choice for the work. But funding and timing constraints meant for now the research has been directed at just one life history stage, intended to determine the effectiveness of removing the first dam by seeking juvenile shad in the section of creek previously blocked off.

With Hale leading the effort and aided by a DESG intern, Brandywine Shad 2020 started fishing, enlisting supporters, community members, and Simeon Hahn, an official at the National Oceanic and Atmospheric Administration’s National Ocean Service, Office of Response and Restoration and a member of the Delaware Sea Grant Advisory Council. During their first trip on the river they caught a few adult shad, which was fantastic, but not proof of the newly opened section of creek serving as a juvenile nursery.

During the second sampling event, at the end of July, they caught more than 150 juvenile shad, demonstrating how important this habitat was to multiple life history stages of American Shad.

Hale said since that exciting first catch, they have consistently caught shad, both adults and juveniles, in the follow-up seining as well. (A seine net is made to hang vertically in the water with weights at the lower edge and floats at the top.) It doesn’t prove shad are spawning in the newly open section of creek, although it is likely and Hale plans to return to conduct a spawning survey in the future. But this year’s catch does show at a minimum that juvenile and adult American Shad are using the habitat newly available to them.

Kauffman said the discovery of juvenile shad in the section of Brandywine Creek previously between the first and second dams was a big discovery, historic for the waterway. And Hale notes there is the potential for 10 years or more of ongoing research to understand how the shad population is affected, as initial fish reach spawning age and as more dams are removed or have fish passages installed if they can’t be taken down.

But from his perspective at the Water Resources Center, Kauffman is also excited for the potential the continuing dam removal project holds for other kinds of research as well. Trained in how to build dams when he got his undergraduate engineering degree, Kauffman finds it compelling to now be involved in what he notes is the young science surrounding dam removal, which he says is only a couple decades old.

“We’re learning a lot about how the Brandywine Creek acts during floods and droughts. We’re learning so much about how rivers can recover,” Kauffman said. “That’s what has been amazing: we’ve seen the results very quickly.”

Kauffman’s background prompts him to study water flow and the physical impacts on rivers and creeks having dams removed. One of the biggest impacts of dam removals from that perspective is the reduction in flooding events or their severity, since free-flowing waterways do not have as much water in normal conditions, meaning it takes more rain to cause them to flood.

The research even goes beyond hydrology and fisheries, with UD’s Center for Historic Architecture and Design involved in evaluating the historic value of the Brandywine Creek’s dams and Shreeram Inamdar of the College of Agriculture and Natural Resources studying changes in water quality brought about by dam removal. (Some dam removal actually opens up portions of the dam to allow the river to flow but aids in historic preservation by shoring up other parts of the structure so they can better stand up to the passage of time. Free flowing rivers also naturally filter excessive nutrient pollution from surface water, the subject of Inamdar’s research.)

Brandywine Shad 2020 has plans in place to remove dams 3, 4 and 6 when it can raise the money to do so, with dams 2 and 5 marked for fish ladders or other passages due to their historic value or infrastructure necessity. When completed, this phase will reach up to Hagley Museum and open three miles of river and acres of new habitat for diadromous fish and natural water filtration.

Both Hale and Kauffman said that as the work and research continues, those involved in the effort are learning things about urban, highly dammed waterways that could inform work in other parts of the state and the larger Delaware Bay and River watershed. Increasing scientific data on American Shad could help surrounding states make decisions about how to manage the fishery.

What we know now

But whatever the future holds for additional dam removals and scientific publications, Hale’s research this summer and fall show improvements are already underway. He noted that American Shad were once very abundant fish, dubbed the “founding fish” by John McPhee for its importance to the American colonial diet, but the combination of dams, pollution and other human impacts have severely reduced the stock.

“The reestablishment of a native, natural, well-performing ecosystem is essentially the goal, and capturing juvenile shad there at that location is suggesting that that is on track and that removing the dam is actually beneficial to the wild ecosystem,” Hale said. “So we’re opening up available habitat. We’re seeing juvenile progeny. We are essentially documenting what could result in population rebuilding or recovery.”