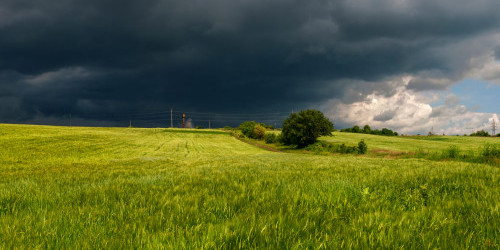 “Climate Smart: Farming with Weather Extremes” is a July 18 conference where farmers and others in agriculture can learn ways to adapt to the growing challenges of a wetter, warming climate. The event will be from 8:30 a.m. to 3 p.m. at Der Dutchman, 445 S. Jefferson Ave., in Plain City. (Getty Images)

COLUMBUS, Ohio — Despite facing a surge in annual rainfall and increased risks of fields eroding and weeds and insects spreading, farmers can build resilience.

That’s one of the central messages of “Climate Smart: Farming with Weather Extremes,” a July 18 conference where farmers and others in agriculture can learn ways to adapt to the growing challenges of a wetter, warming climate. The event will be from 8:30 a.m. to 3 p.m. at Der Dutchman, 445 S. Jefferson Ave., in Plain City.

Climate Smart includes talks from agronomic and horticultural experts from The Ohio State University College of Food, Agricultural, and Environmental Sciences (CFAES), which is co-hosting the conference with the State Climate Office of Ohio.

“The idea is to get people to start thinking about building resilience to the changes we see,” said Aaron Wilson, climate specialist for CFAES.

May 2018 to April 2019 was the wettest year on record nationwide, according to a report from the National Oceanic and Atmospheric Administration’s National Centers for Environmental Information. An average of 36.20 inches of precipitation fell nationwide, which was 6.25 inches above the mean, the agency said.

The excess rain has hindered or even prevented some Ohio farmers from planting their crops in time to ensure decent yields. Some of those who couldn’t plant a cash crop are salvaging what they can in a difficult planting year by planting cover crops instead, to reduce the odds of their fields eroding. Hay supplies to feed livestock are also severely low in the state and across the Midwest because rain has delayed or prevented hay from being cut.

The wheat crop across the state has also been negatively impacted, as growers have dealt with poor stands and drowned-out spots, according to Cheryl Turner, Ohio state statistician, U.S. Department of Agriculture National Agricultural Statistics Service Ohio Field Office. In fact, “wheat conditions going into harvest are much worse than last year,” she said.

Across Ohio, intense downpours—those greater than 1.5 inches—have nearly doubled since 1950. They’re now occurring four to five times per year, on average. April rainfall in Ohio has increased about 25% since 1970, and that’s a month when there aren’t many crops growing to help keep water in the soil, Wilson said.

And the summer outlook from the Climate Prediction Center of the National Weather Service suggests the wetter-than-normal weather will continue across much of the country, the USDA said.

“Farmers are having to combat all of this,” Wilson said.

The intent of Climate Smart is to convey to farmers what the weather trends have been, what effects they’ve caused, and how farmers can adapt to them and still operate profitable businesses.

The event’s keynote speaker will be Tyler Williams, a cropping systems educator with University of Nebraska Extension. His talk will be titled “When extreme climate and extreme weather meet.”

Among the issues Climate Smart will address is managing significant water flows on the surface of fields and underground. That includes examining the pros and cons of various measures to handle the water, including additional ditches, buffer strips, and underground series of pipes that flow into a nearby waterway.

“There are a lot of possible solutions for dealing with increasing rainfall,” Wilson said. “There’s no one perfect solution for all farms.”

Other speakers and topics at the event will include:

For more information, including an agenda about Climate Smart, visit agcrops.osu.edu/events/climate-smart-farming-weather-extremes. Admission to the event is free and open to the public.

Cattlemen’s Gala to be held August 24