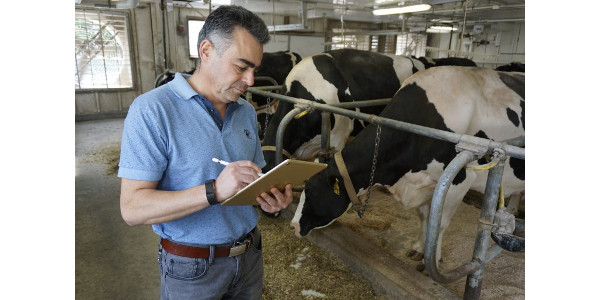 MADISON — There’s a failure to communicate on Mitch Breunig’s dairy farm. The problem doesn’t involve people—Breunig and his crew share information just fine. It has to do with the technologies that Breunig uses to manage his operation. They’re “smart,” but they’re not speaking to each other.

“We’re generating a lot of data every day from a bunch of different systems—a feed system, a milk system, how much milk you actually ship. And none of those systems talk to each other,” Breunig says.

The upshot is that while Breunig has access to great data, he can’t use it the way he’d like. For example, he’d like to have a daily report of his feed efficiency—pounds of milk produced per pound of feed consumed—so he could adjust his rations to improve profitability. But it’s a pain to calculate because it requires data from his feed management software, written notes on tanker weight, and reports texted from his milk buyer.

“You can enter it by hand, but you haven’t got the time, so you don’t do it for a week, and then you go back and do the data, and you cram it in,” he says. “Unless you’re doing it every day it’s hard to get it right. You’re always looking way too far in the rearview mirror. The data is generated every day. We should be able to look at it every day.”

There ought to be an app for that, and soon there could be. A multidisciplinary team of University of Wisconsin-Madison scientists has set out to create a “virtual dairy farm brain” that will collect and integrate all of a farm’s data streams in real time and then use artificial intelligence to analyze those data to help farmers make better management decisions.

“Dairy farms have embraced a lot of technologies that generate vast amounts of data,” he says. “The problem is that farmers haven’t been able to integrate this information to improve whole-farm decision-making.

The UW team, which includes dairy scientists, agricultural economists and computer scientists, is starting out by streaming data on about 4,000 cows in three Wisconsin herds (including Breunig’s) to a campus-based server. This is a no simple task, because dairy operations generate so many types of data from so many sources—everything from pounds of feed consumed and pounds of milk produced to how many times a cow chews (rumination), how many steps she takes and her internal temperature. Plus there are sire records and genomic tests and other data on each cow, and data from off the farm about things like weather, and prices of milk and feed.

UW dairy scientists are no strangers to data management, but wrangling so many streams of disparate data in real time requires a specialized skill set. That’s why they’re collaborating with the UW’s Center for High Throughput Computing, based at the Wisconsin Institutes for Discovery.

“It’s not just a matter of having access to systems that can handle big data sets. We also need the expertise to filter it. We are collecting a lot of data, but a lot of it is repetitious or not relevant. We need be able to filter out the noise and attach identifiers to each type of data. To do this in real time is not a trivial thing,” Cabrera says.

The computer science expertise is also key to the project’s second step: Using artificial intelligence to predict more accurately the outcome of various management options. The computer scientists will devise algorithms that analyze what’s happening on the farms—which inputs result in which outcomes—and to learn from that to do a better job of predicting.

The final step will be to apply what they’ve learned to create intuitive, cloud-based decision-support tools that allow farmers to use real-time data from their farms to make smarter management decisions.

In addition to Breunig’s Mystic Valley Farm near Sauk City, the team is streaming data from Larson Acres near Evansville and the UW dairy science department’s own research herd. The team looked for farms reasonably close to campus that were already generating and using lots of data—including genomic information on every cow. They also wanted operations that were very well managed.

“We called this project the virtual dairy farm brain because we’re trying to mimic the thinking of a very good dairy farm manager,” says Cabrera. “We’re going to start by seeing what the manager decides to do with the data and then see what our system would come up with as potentially the best decision.

When the two-year project is complete, Cabrera hopes to follow it up with a larger study involving 100–200 farms representing a variety of sizes and management styles.

“We think the methodology should apply to any farm. It could be adjusted to suit whatever data are available,” Cabrera says. “The basic approach would be very similar on a 100-cow farm or a 8,000-cow operation. The concept would not be different as long as you have good quality data. And every farm is generating data. It’s just a question of how it’s used.”