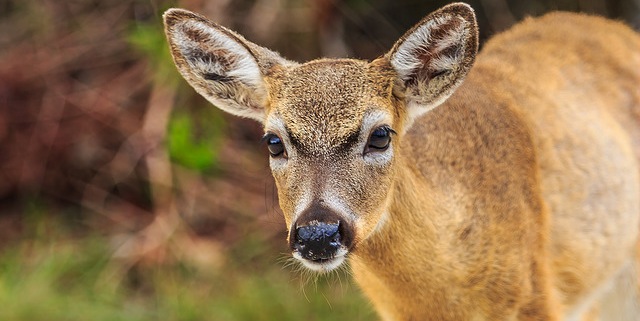 The primary objective of CWD management is to prevent it from entering our state, so the FWC has adopted regulations about transporting harvested deer into Florida. (Murray Foubister, Flickr/Creative Commons)

TALLAHASSEE — “The Florida Fish and Wildlife Conservation Commission (FWC) is looking to hunters this coming season to help us monitor the state’s deer herd for chronic wasting disease, or CWD as it’s more commonly called. We’re fortunate that CWD has not been found in Florida or our neighboring states. But it’s going to take the help of hunters to keep it that way,” said Cory Morea, FWC’s Deer Management Program coordinator. “Any Floridian planning to hunt deer, moose or elk out of state needs to be aware of certain laws and regulations aimed at preventing CWD from coming into our state.”

Fatal CWD is a transmissible disease that attacks the brains of infected cervids, such as mule deer, white-tailed deer, moose and elk, eventually causing them to become emaciated and display unusual behavior. It is caused by an abnormal protein called a prion. Scientists still have much to learn about CWD.

“Warning signs that hunters can look out for while in the field include deer that are extremely thin or appear sick, or those exhibiting odd behavior such as staggering, walking in circles, standing with a wide stance, head tremors, or deer found dead from unknown causes,” Morea said. “If you see a deer in Florida that fits this description, call 866-CWD-WATCH (293-9282).”

Transmission of CWD occurs by direct contact with an infected deer or by consuming abnormal prions that have been deposited into the environment. In this second scenario, the prion stays in the soil and can remain infectious for years.

“While there’s no evidence that CWD can be transmitted to humans or livestock, the impacts of this disease can have a significant negative impact on deer populations and our traditional hunting activities,” Morea said.

Currently, the only reliable method for diagnosing CWD is through analysis of brain stem tissue or lymph nodes from dead deer. Therefore, Florida’s nearly quarter-million hunters can play an important role in CWD surveillance by providing samples from harvested deer for testing.

How you can help

“Our goal is to collect samples throughout Florida, and we’re asking private landowners and hunting clubs to participate in this surveillance. Since 2002, we’ve tested nearly 10,000 hunter-killed, road-killed and sick/diseased deer for CWD,” said Mark Cunningham, FWC state veterinarian. “If you’d like to help, contact our toll-free CWD Hotline at 866-CWD-WATCH (293-9282) for further information, and to coordinate collection and pickup of deer samples.”

What is legal to bring back when hunting out of state

The primary objective of CWD management is to prevent it from entering our state, so the FWC has adopted regulations about transporting harvested deer into Florida.

Hunters are prohibited from bringing into Florida whole carcasses of any cervid from any of the above listed states or countries that have been confirmed to have CWD. From these areas, hunters can only bring back deboned meat, finished taxidermy mounts, hides, skulls, antlers and teeth – as long as all soft tissue has been removed. The importation of live deer into Florida is also prohibited. The public is encouraged to report any such possible violations to the FWC by calling the Wildlife Alert Hotline, toll-free, 888-404-FWCC (3922).

Should a CWD outbreak occur in Florida, the keys to effective management will be detecting it early and taking swift action to limit its spread. Because of this, the FWC has a CWD action team and response plan in place. FWC staff is ready to respond along with other government agencies, such as the Florida Department of Agriculture and Consumer Services, U.S. Department of Agriculture, U.S. Fish and Wildlife Service, Florida Department of Health, and the Centers for Disease Control and Prevention.

What’s the number to call?

“This hunting season, if you come across or harvest a deer that appears sick or emaciated, or one that has died from unknown causes, call our toll-free hotline that’s available seven days a week at 866-CWD-WATCH (293-9282),” Cunningham said. “And it’s important to call as soon as possible so the carcass can be collected and tested while it’s still fresh.”

We all can help keep CWD out of Florida’s deer herd by staying well-informed, taking precautions and acting quickly when necessary.

If you’d like to learn more about CWD, including links to several state and federal government websites containing more in-depth information on this serious disease, visit MyFWC.com/CWD.