Home / Florida / Help FWC monitor fish health
A new user experience is coming! We'll be asking you to login to your Morning Ag Clips account March 1st to access these new features.
We can't wait to share them with you! Read more here. 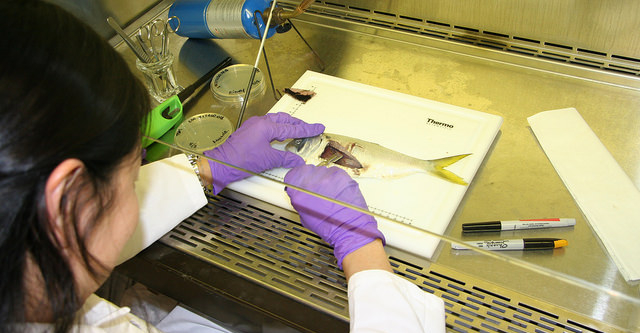 Bacteriology is regularly performed on most samples that are received at the lab. A positive test can indicate a systemic infection. Mortality events or diseases may be an indication of an environmental health problem, and the Fish and Wildlife Health Group at FWRI investigates and documents mortality and disease events around the state. (FWC Fish and Wildlife Research Institute, Flickr/Creative Commons)

“The public’s involvement is critical to locate, monitor and understand the extent of fish kills. Reporting observations to the hotline ensures a coordinated response to incidents and alleviates public concern,” said Theresa Cody, associate research scientist. “All the data collected from fish kill events are used in conjunction with directed research to further understand the causes of fish kills and disease incidences.”

Many factors can contribute to a fish kill. Weather-related factors are common causes. Sudden temperature fluctuations or extreme temperatures can result in fish kills any time of the year. Hot weather during the summer months can cause fish kills, in part because warm water holds less oxygen than cold water. In addition, a lack of rain during hot-weather months can lower water level in lakes and ponds, resulting in poor water quality, increased density of animals and faster use of dissolved oxygen. Heavy rains can compound the situation by suspending sediments in the water column and by washing vegetation, such as leaves and grass clippings, into the system where they will decompose. The decomposition process also can remove oxygen from water.

The good news is that most natural water bodies are resilient to fish kill events.

The public can report fish kills to the FWC at MyFWC.com/FishKill or by calling the FWC Fish Kill Hotline at 800-636-0511. You can also submit a report through the “FWC Reporter” app on your iOS or Android mobile devices. It is not necessary to report fish kills in man-made retention or private ponds to the FWC. The Fish Kill Hotline is sponsored in part by a U.S. Fish & Wildlife Service, Wildlife and Sport Fish Restoration Program grant.

National Peanut Board to set direction