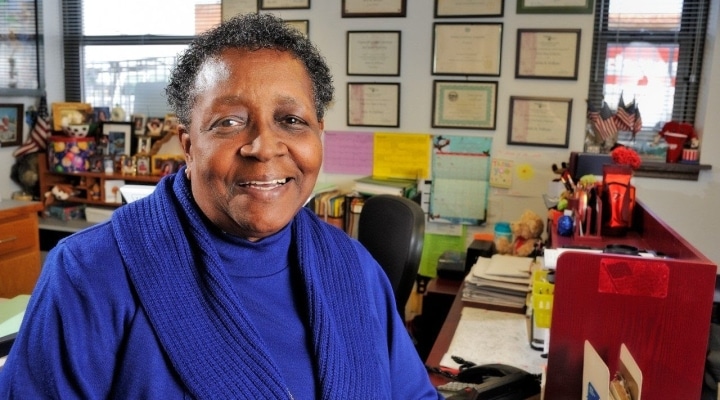 If you ever made a phone call when you’ve needed help or guidance on any number of issues in Amherst County over the last 65 years, chances are you’ve been greeted by a singular voice asking this: “Good afternoon, Virginia Cooperative Extension, Amherst Office, may I help you?” That voice belongs to Helen Williams, one of Virginia’s longest-serving state employees and the administrative assistant for the office. (photos by Virginia Tech University)

BLACKSBURG, Va. — If you ever made a phone call when you’ve needed help or guidance on any number of issues in Amherst County over the last 65 years, chances are you’ve been greeted by a singular voice asking this: “Good afternoon, Virginia Cooperative Extension, Amherst Office, may I help you?”

That voice belongs to Helen Williams, one of Virginia’s longest-serving state employees and the administrative assistant for the office.

Williams was born and raised in Amherst County, which has around 32,000 people and sits just north of Lynchburg. Now 83-years-old, Williams was born to Raymond Alexander Williams, a chef at Sweet Briar College, and his wife, Mary Frances Williams, in 1939.

She joined Virginia Cooperative Extension in March 1957, and the smiling faces and the down-to-earth people at Extension, Virginia Tech, and Virginia State University inspired her from the day she first stepped into her local Extension office.

What does celebrating this work anniversary milestone mean to you?

I can’t believe I’ve been here this long! People ask me why don’t I retire. When I retire, everyone will know. I’m just not ready yet. When they see me in the stores sometimes, the little children that I’ve worked with at 4-H years ago, they say hi.

I wish my mom was here to celebrate with me, but I know she’s watching over me.

How did you get your start with Virginia Cooperative Extension?

I started working at Extension after I graduated from Central High School as a general typist when I met Mrs. Youtha B. Turner, an Extension agent for home economics, called a home demonstration agent back then. I worked with Mrs. Turner in the segregated Extension office.

Mrs. Turner recommended me as the secretary to Ross W. Newsome. After a little while in the segregated office, we moved combined office in the courthouse. After the integration, I worked with Mrs. Helen C. Feagans. We still used home demonstration agents until a few years later, when the name changed to family consumer education. Now it’s called family consumer sciences.

What is one of your favorite memories from your career in Virginia Cooperative Extension?

I sat in the president’s suite for the game. They served us anything we wanted. They joked that I needed to jump for the entrance. I couldn’t quite do that! I really enjoyed it. They won two straight games! The one I went to and the next one.

They said I need to come back!

I had never been to a stadium like that — it was so big! Everyone there was so nice. They called me Miss Helen. I’ve talked to a lot of people, but I haven’t met them before. I enjoyed meeting them and that they were down-to-earth people.

After I left the game, they took me on a tour of campus and sight-seeing in the area.

We used typewriters in the office for most tasks. One machine that we used was called the mimeograph, an old version of a copy machine. We had to wear aprons so we didn’t get ink on ourselves!

We had some other machines in the office until we made the transition to computers, which was fantastic. It was scary at first. I had never used a computer before. But I went to training to help get us ready. I bought my own to have at home so I could learn more. I actually still have it. It was hard to get used to it, but I learned more and more each year. I’m comfortable with computers now.

At 4-H camp, I stayed in the bunkhouse with 45 children. I just loved it! It was so fun. They would talk with me, play with me as if I was one of them. I would get up early in the morning — I’d get up before they did. I’d wake them up and help them get ready for the day. I helped with their activities at the camp. I even combed some of the kid’s hair to help them get ready.

I went to 4-H camp back then at Holiday Lake — I don’t anymore. I still love working with children. I just found new ways to keep working with the kids, like through church and 4-H club meetings.

What inspired you to have your career be with Extension?

I like down-to-earth people, basically people that are jolly. The people from Virginia Tech and Virginia State University are that. When they call on the phone, I want them to be happy. I enjoy being happy.

To honor her commitment, dedication and service to our land grant mission, the Helen B. Williams Excellence Fund for Amherst Extension has been established. Funds generated from the endowment will support camperships for 4-H youth and provide programmatic support for improving the well-being of those in the Amherst community in perpetuity. Celebrate this extraordinary milestone anniversary with a gift to the Helen B. Williams Excellence Endowment for Amherst Extension. 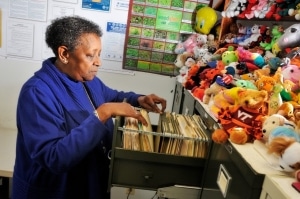