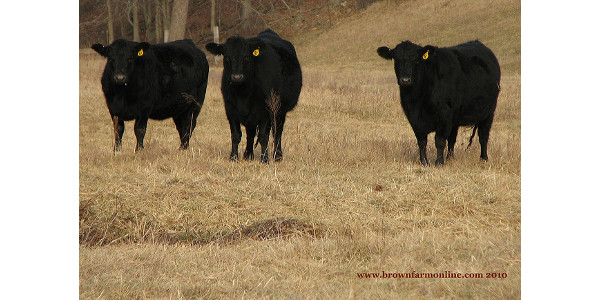 Avoid abrupt diet changes immediately after AI or before turning out bulls for natural service breeding. (Julie A Brown via Flickr, www.brownfarmonline.com)

SEDALIA, Mo. — I recently ran across some information we received at our livestock specialist update a few years ago from Dr. George Perry from South Dakota State University. He discussed beef heifer nutrition at breeding time, and the impact of dietary changes on pregnancy rate and early embryonic development. Some of the information from his presentation is highlighted below.

Heifers are particularly sensitive to large changes in diet composition at or near breeding time. These effects are most noticeable with AI bred heifers. Much of the work Dr. Perry presented focused on drylot vs. pasture systems for developing heifers pre-breeding, and studying the impact of dietary change on animal behavior, animal gain, and AI pregnancy rates.

Some of these impacts affect natural service breeding systems also. Dr. Perry cited a study reported in 1999. This study concluded that a decrease in feed intake from 120% of maintenance to 40% of maintenance resulted in a loss of over 50 pounds during a two-week period, and 60% of heifers stopped ovulating within 13 to 15 days of diet change. While this may sound extreme, the studies mentioned above show that dry matter intake and heifer growth rate can dramatically decrease if drylot or supplemented heifers are abruptly shifted to pasture only diets.

The main take home message is to avoid abrupt diet changes immediately after AI or before turning out bulls for natural service breeding. If heifers are shifted from drylot development to pasture, be sure to supplement additional energy to overcome some of these negative effects. Bottom line is that as heifers transition from hay-based rations to grazing, ease that shift through continued supplementation to avoid drastic reductions in energy intake to improve AI or early breeding success.

If you have additional questions on heifer development, contact me at schmitze@missouri.edu or call the Pettis County Extension Center at (660) 827-0591.