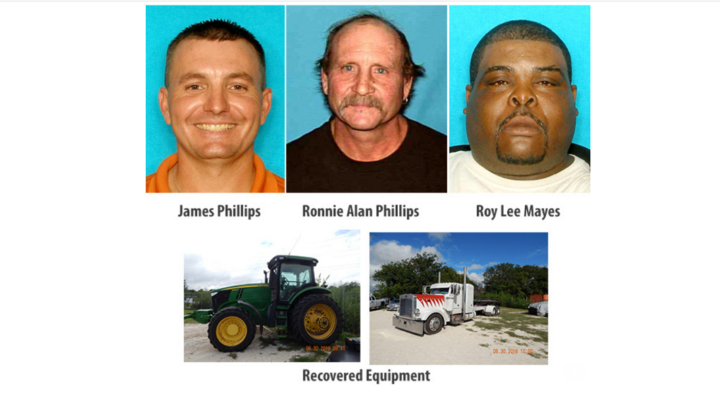 In late August 2016, TSCRA Special Ranger Scott Williamson was notified that a John Deere tractor, valued at more than $150,000, had been stolen from a property south of Munday, Texas. (Courtesy Photo)

HASKELL, Texas — Four members of a Texas theft ring were recently sentenced to a combined 61 years of jail time for their crimes. The sentences were handed down by presiding Judge Shane Hadaway in the 39th District Court in Haskell County. The convictions are the result of an investigation conducted by Texas and Southwestern Cattle Raisers (TSCRA) Special Ranger Scott Williamson.

In late August 2016, Williamson was notified that a John Deere tractor, valued at more than $150,000, had been stolen from a property south of Munday, Texas. The Haskell County Sheriff’s Department initiated the investigation, but quickly turned it over to Williamson after the tractor was found loaded on a semi-truck in Kendall County, west of San Antonio, Texas. Investigators believe the tractor was bound for Mexico where it would be sold on the black market. The primary suspect in the case, James Christopher Phillips, 38, of Munday, was arrested by Kendall County law enforcement officials on an unrelated outstanding warrant.

Special Ranger Williamson began a thorough investigation with the assistance of Special Rangers Michael Barr and Tommy Charbula. The ensuing investigation identified several accomplices and additional stolen equipment. In total, Williamson recovered and returned more than $273,000 in equipment to the rightful owners. That equipment included the 2012 John Deere tractor, a 2001 Peterbuilt semi-truck and three semitrailers.

All four were remanded to the custody of the Texas Department of Criminal Justice to serve out their sentences.

“Crimes like this have a huge impact on our farmers and ranchers who rely on their equipment to make a living,” said Williamson. “I hope the severe sentences in this case will serve as a warning to anyone who is thinking about stealing from our hard-working agriculture producers.”