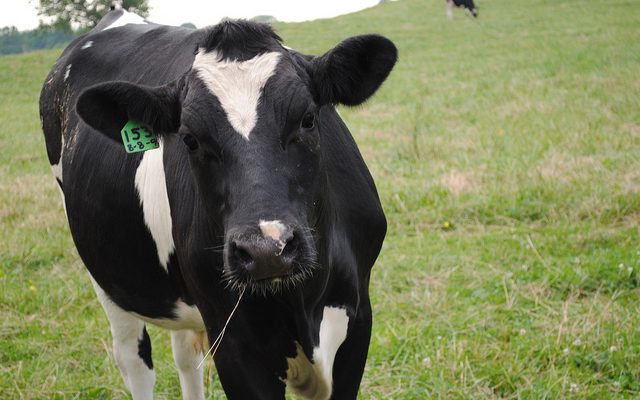 Experienced dairymen say that when the cows are not comfortable and cool, a decline in milk starts to show up. (katesheets via Flickr)

CASSVILLE, Mo. — A group of dairymen gathered under a newly constructed dry cow facility at Martin’s Dairy in Humansville for Missouri Dairy Industry Alliance (MDIA) field day in early June to discuss reasons to manage Missouri’s heat stress and solutions they can implement right away.

Experienced dairymen say that when the cows are not comfortable and cool, a decline in milk starts to show up. It is not rare for the vulnerable herds to experience 10-20 percent decline in milk production during the hottest of times.

In southwest Missouri, summer heat and humidity have already arrived. That means heat stress is a timely topic for discussion according to Reagan Bluel, dairy specialist with University of Missouri Extension.

One reason is the impact on the calf inside a heat-stressed dry cow.

“Research recently released from the University of Florida helped paint a picture of the long-term impact of heat stress. They focused on the dry cow in that study,” said Bluel.

Looking at five years of data, cows during their 46-day dry period that were provided access to shade (heat stressed) were compared to cows provided shade, sprinklers, and fans (cooled). The average summertime temperature, 75 degrees Fahrenheit.

Researchers found the vulnerable developing heifer calf inside the heat stressed dam was 4.1x more likely to be delivered stillborn, 10 pounds lighter at birth, had a lower weaning weight, and was more likely to be culled because of comprised immunity and deformities.

The study also showed that these situations require more services to become pregnant (2.0 vs. 2.5). A heat-stressed cow would also produce on average 11.2 lbs/head/day less than her cooled counterparts throughout the first 245 days of lactation

In addition to loosing the milk production immediately from the heat stressed dam, the dairy is hit with a double whammy because her heifer produces less too, two years later according to Bluel.

“Perhaps the most concerning part of this data, is the researchers expect a phenomenon called fetal programming is to blame for the decline in performance between the heat-stressed calf and the cooled,” said Bluel.

This means the DNA of the calf born from a dam who was heat stressed is permanently changed to be metabolically different from her cooled peers.

“It’s time to take control of your herd’s heat stress. There are very few scenarios where the return doesn’t pay back the investment rapidly when using a model that only looks at the milk loss on the year of heat stress. When you consider the impact on the unborn fetus, heat stress is beginning to compete as one of the most costly issues in the dairy industry,” said Bluel.

Zinnias can be a mainstay in any garden