Home / National / Heat, salt, drought: this barley can handle it 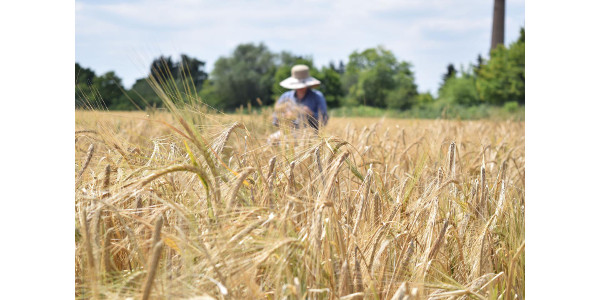 HALLE, Germany — Research for the benefit of food security: A new line of barley achieves good crop yields even under poor environmental conditions. It has been bred by a research team from Martin Luther University Halle-Wittenberg (MLU), which crossed a common variety with various types of wild barley. The researchers then planted the new lines of barley in five very different locations around the world, observed the growth of the plants and analysed their genetic make-up. As the team reports in “Scientific Reports,” some of the plants were not only more resistant to heat and drought, but in many cases achieve higher yields than local varieties.

Barley, along with wheat and rice, is one of the most important cereals for human nutrition. “The demand for food is increasing worldwide, which is why the cultivation of these cereals must generate reliable crop yields. However, climate change is taking its toll on cultivation conditions worldwide and plants have to be fertilized and irrigated more frequently,” says plant scientist Professor Klaus Pillen from MLU. His research team is studying how to improve common cereal varieties for years. Their approach is to cross certain industrially used barley varieties with wild barley. “Wild barley has adapted to adverse environmental conditions over millions of years. It still has a rich biodiversity today,” explains Pillen. The idea is to combine the advantageous properties of both cereals.

For the study, the research team crossed a typical barley variety with 25 types of wild barley. This resulted in 48 genetically different plant lines, which the research team planted at five very different locations around the world: Dundee (UK), Halle (Germany), Al Karak (Jordan), Dubai (United Arab Emirates) and Adelaide (Australia). Each of these places has its own environmental conditions: Australia and Dubai suffer from very salty, dry soils, Al Karak and Dubai from heat and drought. In Germany and UK, fields always receive additional nitrogen fertilizer in order to increase crop yields. During the cultivation period, the scientists observed the growth of the plants under environmental stress and compared the results to native varieties from a control group. “We then selected plants from our cultivation that grew particularly well on site and examined their genetic material more closely,” continues Pillen. The researchers wanted to draw conclusions about the interaction between genes, the environment and crop yields.

“Our study also shows that the timing of plant development is extremely important. This ensures maximum crop yields even under unfavourable environmental conditions,” says Pillen. By this he means, for example, the length of daylight, which varies according to latitude: the closer a place is to the equator, the shorter the duration of daily sunshine during spring and summer. This has a big impact on the development of the plants. “In northern Europe, it is more advantageous for plants to flower later. The closer you get to the equator, it’s better for plants to develop much faster,” explains Pillen. Based on genetic analyses of the plants, the team was also able to draw conclusions about the gene variants that cause this acceleration or delay in development.

Knowing which gene variants are advantageous for which geographical regions allows plants that are particularly well adapted to the local conditions to be crossed, bred and cultivated according to the modular principle. And this is all well worth the effort: even under adverse conditions, Halle’s best barley produced up to 20 percent higher yields than native plants.

In follow-up projects, the research team would like to further investigate the genetic material in order to gain more detailed insights into the stress tolerance of plants. The findings from the new study can, in principle, also be applied to other cereal varieties, such as wheat and rice.

Cycling success may free up fifth of ag land