Home / National / Hearing reviewed the state of Black farmers in the U.S.
A new user experience is coming! We'll be asking you to login to your Morning Ag Clips account March 1st to access these new features.
We can't wait to share them with you! Read more here. 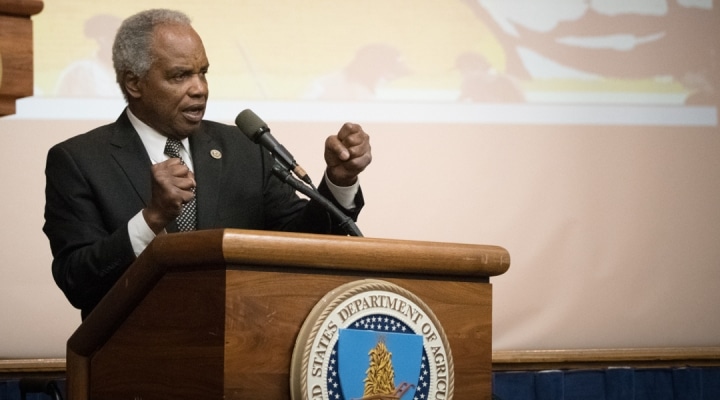 "This hearing today is a very public way to address the deep mistrust that many farmers of color feel towards USDA, and to make sure that in an increasingly competitive agriculture economy no talent or ability is ignored or left behind. We no longer can afford that approach," stated House Agriculture Committee Chairman David Scott. (U.S. Department of Agriculture, Public Domain)

WASHINGTON — House Agriculture Committee Chairman David Scott delivered the following statement at the March 25th hearing titled “A Hearing to Review the State of Black Farmers in the U.S.”:

[As prepared for delivery]

Good afternoon, I’m pleased to have the opportunity today to examine a topic which is deeply embedded in my heart – the status of Black Farmers in the United States. And as always, I appreciate the opportunity to work on this matter alongside my colleague, Ranking Member Thompson of Pennsylvania.

I want to thank our newly appointed Secretary of Agriculture Tom Vilsack for appearing before the Committee today. This is our first conversation of your second tenure at USDA Mr. Secretary, and we are glad you are before us today.

I know that you are extremely busy, and I appreciate your time today to speak on this essential issue. An issue that I know you too have wrestled with.

For decades the discrimination against Black farmers by USDA has been well-documented. Reports by the U.S. Commission on Civil Rights, the Government Accountability Office, and even the USDA itself describe the discriminatory practices enabled by laws dating back to the 1930s.

USDA settled this class action lawsuit, and as a part of that settlement, some Black farmers received $50,000 dollars. Now many of my House colleagues may think that $50,000 dollars is a lot of money, but when a new tractor costs as much as a half a million dollars, $50,000 dollars is barely enough to buy even a reasonably good used one.

It isn’t enough to make improvements to the land. It may not even be enough to finance next year’s purchases of seed and fertilizer. And in my frank opinion, $50,000 dollars is not enough to make up for decades of discrimination and generational wealth lost from the losing of land and livelihood among Black farmers.

Further, adding insult to injury, Black farmers were saddled with IRS tax bills from the Pigford settlements, leaving many of them worse off than before.

This festering wound on the soul of American agriculture must be healed. That is why I have repeatedly called for a new conversation between Black farmers and USDA. This hearing is an opportunity for us, together, with Secretary Vilsack, to begin that conversation and examine the Secretary’s ideas and reforms that I understand are being contemplated at USDA.

This hearing today is a very public way to address the deep mistrust that many farmers of color feel towards USDA, and to make sure that in an increasingly competitive agriculture economy no talent or ability is ignored or left behind. We no longer can afford that approach.

The Black farmer representatives who are here with us today will discuss the longstanding, systemic discrimination against Black farmers and its cumulative impact on Black farming in the United States. In 1920 Black farm operators were 14 percent of all U.S. farmers.

Today Black farmers make up less than 2 percent of all farmers in the United States. Lack of equal access to federal farm loan programs is a large reason Black farmers have lost 90% of their land.

In 1937, Congress required that locally elected county committees certify the eligibility of farmers for the farm loan program.

When a farmer applied for a farm program, the county committees received sensitive information about the applicant; this left credit-worthiness up to an elected county committee, many of whom were landlords.  So, there was a built-in bias against Black farmers for decades.  And subsequent laws and their regulations are built on that same foundation of inequity.

For those who feel that the number of loans is fairly representative of the number of black farmers today, I say they totally miss the point.  Most farmers who can’t get a loan are simply not farming.

But, we are here to find out why they aren’t farming, to examine the built in barriers to the loan system and see how to remove them.

We have 6 farmers and farmer advocates here with us today who will share their experience and solutions to address the effects of discrimination and improve the profitability and sustainability of Black farmers.

New problems arise for crop storage as planet gets warmer

Vilsack delivers statement to House during hearing on Black farmers