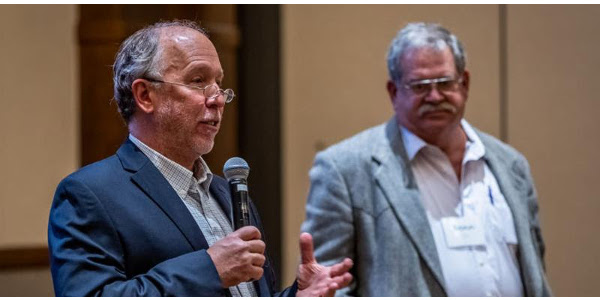 "This isn't a Democrat issue, it's not a Republican issue-it's a human issue. It's your neighbors, your families, your sons and daughters and your wife. It's providing you with the quality of life you deserve and protecting you against financial disaster," said Dr. David Terry, psychiatrist and member of Physicians for a National Health Program. (Courtesy of Kansas Farmers Union)

MCPHERSON, Kan. — When Walter Cronkite spoke, America listened. His unbiased reporting on events from Vietnam, President Kennedy’s assassination and Watergate earned him the title of “the most trusted man in America.” Cronkite’s words carried weight, and though he strictly adhered to the standards of objective journalism, he still managed to make his opinions known. For instance, his disdain for the health care system needed no elaboration when he said, “The American health care system is neither healthy, caring, nor is it a system.”

It is, however, a strategy, according to Dr. David Terry, one meant to maximize profits for pharmaceutical companies, insurance providers and medical administrators while minimizing costs and expenses. That might sound like textbook capitalism, but Terry had another term for it: “medical impoverishment.”

Terry, a Kansas City, Kan., psychiatrist and member of Physicians for a National Health Program, argued that the current health care system in America not only makes Americans sicker, it also makes them poorer and reduces their life expectancy, when compared to other industrialized nations. His presentation, “Facts and Fallacies of a Single Payer Healthcare System,” was presented during the Kansas Farmers Union’s annual convention at Prairie Band Casino and Resort in Mayetta in late November.

The impoverishment Terry alluded to was for patients, not providers. For CEOs of the major insurance companies, the strategy reaps enormous benefits, such as Aetna’s Mark Bertolini, whose annual salary in 2016 topped $42 million, or United Health’s Stephen Hemsley, with $31 million, or, for that matter, Humana’s Bruce Broussard, on the low end of the scale with only $17 million.

Nor does the term apply to the pharmaceutical industry, which in 2016 earned $67.7 billion in profits, according to Fortune 500. Insurers made a respectable $15 billion in profits, and another $28 billion was shared among equipment suppliers, distributors and wholesalers, management and others.

For the industry as a whole, the prognosis looks very good. For most Americans, it’s not so good, Terry said.

Premiums continue to rise, forcing more and more Americans to scale back their health care coverage. More than one-quarter of insured adults were underinsured in 2016, with plans that offer higher deductibles, greater out-of-pocket expenses and lower maximum amounts of coverage.

“If you have a high deductible or are underinsured, you’re going to have a harder time paying your bills,” Terry said. “Not only that, if you’re underinsured and you have high deductibles, you’re not going to go to the doctor when you’re sick because it’s too expensive. You have to pay your bills and put food on the table. And when you do go to the doctor, you’re going to be sicker, and it’s going to cost more to treat you. Being uninsured or underinsured leads to poverty.”

In 2007, 62 percent of personal bankruptcies were due to medical expenses, according to the American Journal of Medicine. Of those, 78 percent had health insurance at the time.

And it’s projected to get worse. According to the Annals of Family Medicine, if health care premium costs and household income continue to rise at their current rates, by 2035 premiums will equal annual income.

“There’s a lot of money going out toward health care,” he said. “What are we paying for? In 1985 there was a growth in health care. And we’d like to think that the number of doctors, nurses and nurse practitioners were increasing at that time, but this is where the growth occurred-in administrative personnel, bill collectors, insurance sales people, information technology, medical device manufacturers and sales, advertising. In real terms, in 2014 the average person spent $10,000 a year in healthcare; $3,000 of that was for administration only.”

And it’s not making us healthier. America ranks 25th out of other nations for life expectancy-below Chile, Portugal and Costa Rica-and it’s going down, according to the Organization for Economic Co-operation and Development (OECD). More women die from childbirth in the U.S. than in other industrialized countries, and the nation ranks highest in infant mortality during the first year of life, too. In fact, the United States now has the greatest amount of deaths from potentially preventable causes than any other industrialized nation.

And this in spite of the vast sums of money that goes toward health care. During 2016, nearly 18 percent of the nation’s $18 trillion annual Gross Domestic Product, or GDP, was spent on health care. “Now, I’m not an economist, I’m not an epidemiologist, I’m a physician,” Terry said. “I’m not even a business person. But this is a lot of money. We spend more than any other country on earth on health care. Of that total, about eight percent comes from the government from our taxes and the rest comes from us. That’s our discretionary cash.”

And then something happens that reverses everything: Americans turn 65, and they’re eligible for Medicare.

“And as we get Medicare, we have insurance and we can go see doctors and hospitals,” Terry said. “We’re not burdened with financial consequences of not having insurance, and we get the health resources that we need.”

Medicare means that you’re in control of your own health care, he said. There are no limited insurance plans, and no out-of-network copays. You can go to virtually any hospital or doctor in any state when you have Medicare.

“Medicare also means we’re not wasting money on bureaucracy,” Terry said. “When we look at the overhead on most insurance plans, it’s at 20 percent. Medicare A and B have 2.2 percent. That’s a big reduction.” A big part of that reduction comes from employee salaries. Commercial insurance providers employ 470,000 people to Medicare’s 6,000 people.

Medicare is efficient, it’s less expensive, and it’s the solution to the health care crisis in the United States, he said. A majority of Americans now support a single payer system based on a Medicare framework. That includes 123 representatives and 38 senators who cosponsored HR 676, the Expanded and Improved Medicare for All Act. The bill would establish the Medicare for All Program to provide all individuals residing in the United States and U.S. territories with free health care, including all medically necessary care, such as primary care and prevention, dietary and nutritional therapies, prescription drugs, emergency care, long-term care, mental health services, dental services, and vision care.

Physicians for a National Health Program (PNHP), of which Terry is a member, also actively advocates for such a system. The organization has more than 20,000 members and chapters across the country.

“We want to keep Medicare, but we want to improve it,” he said. “We want to eliminate financial barriers, we don’t want extra policies for coverage, we want it simple and straightforward. And we want to expand it to include every American, including the people in Washington and Congress.”

There would still be costs associated with the program, he said, but nowhere near that of private insurance. Plus the savings would be enough to fund full coverage for all Americans, according to 27 independent studies.

“This isn’t a Democrat issue, it’s not a Republican issue-it’s a human issue,” Terry said. “It’s your neighbors, your families, your sons and daughters and your wife. It’s providing you with the quality of life you deserve and protecting you against financial disaster.”

More information can be found at www.pnhp.org.

Kansas Farmers Union is the state’s oldest active general farm organization working to protect and enhance the economic interests and quality of life for family farmers, ranchers and rural communities.