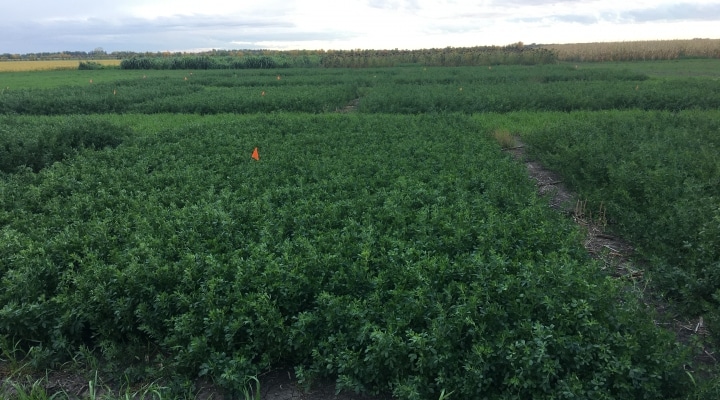 It is important to wait until mid-October, or a killing frost, whichever occurs first, to hay late-season alfalfa. (Courtesy Photo)

FARGO, N.D. — Due to the impacts of the drought, livestock producers are in search of additional feed.

“Some areas in North Dakota and northwest Minnesota have received rain in late August and early September causing alfalfa fields to green up,” says Miranda Meehan, North Dakota State University Extension livestock environmental stewardship specialist. “Producers are asking what the risks and rewards are of haying the alfalfa crop at this time of the year.”

“Fall is the time when carbohydrates are stored in a plant’s root in order to survive the cold winter,” says Hans Kandel, NDSU Extension agronomist. “Sugars are translocated into the root during fall. When the alfalfa is cut in September, the plant will try to grow again and will utilize the sugars in the crown and root, mobilizing them for new shoot development.”

Therefore, it is important to wait until mid-October, or a killing frost, whichever occurs first. After mid-October, even if the weather is good and no killing frost has occurred, alfalfa will not regrow. Because alfalfa also is sensitive to day length, as the days get shorter, the plant will go dormant even without a killing frost.

“The benefit of waiting is that the root will have the energy needed to survive the winter and start regrowth next spring, reducing the potential for winterkill,” says Marisol Berti, NDSU Department of Plant Sciences professor. “However, winter survival also will depend on the winter we will get. A nice snow cover and slow melt will increase the winter survival of the alfalfa. However, waiting for the alfalfa to go dormant may reduce feed quality if harvest is delayed until after a killing frost. It may also be more difficult to make hay as the temperatures will start to drop and days become shorter.”

Grazing is another option for utilizing late-season alfalfa. Grazing in the fall instead of haying is one way of avoiding the challenges of putting up a good quality hay late in the season. Grazing alfalfa in the fall can provide a high-quality forage and reduce pressures on drought-stressed pastures.

It is important to not graze alfalfa or alfalfa-grass stands too short, cautions Berti. If over-grazed the risk for winterkill increases, especially in stands greater than four years old. Berti recommends leaving a minimum stubble height of 4 to 6 inches to assure proper snow catch and protection of the alfalfa crown.

Meehan concludes, “Late-season alfalfa can be a good source of late season forage and increase grazing days or hay inventories on drought-impacted ranches. A fall harvest, timed properly with adequate stubble height, will not kill alfalfa, although it is likely it will delay the first cut next season.”

For more information on haying or grazing late-season alfalfa and other topics, contact your county NDSU Extension agent.

Dakota Gardener: Now is the time to kill weeds in lawns