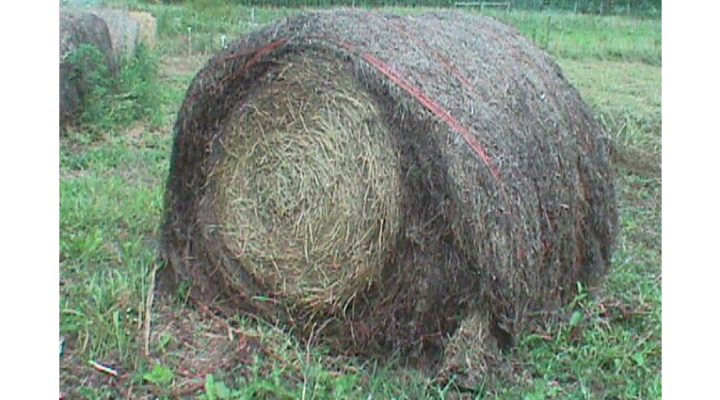 Where and how hay is stored can have a huge impact on the quality and quantity that’s available to be used for feed. (Courtesy Photo)

COLUMBUS, Ohio — With the calendar turning to November, and the temperatures dropping below freezing several mornings now, the time to feed hay is near, if not already here. Several have been feeding hay due to the pasture situation following a dry September that included several 90 degree plus days that zapped much of the grass.

I hope by now that samples have been pulled to get some idea of the nutrients in your hay so you can supplement when needed. Locally I have stressed the concern for hay quality for the passed few months and feel it is something many do not take as serious as maybe they should. The idea that I have heard time after time over the years is, it will beat snowballs, keeps coming to mind. That is a true statement, but will it beat wheat straw? Maybe.

So, hay is already starting to seem to be more valuable than it would be most Novembers. If you think you are going to be short, it might not be the best plan to wait and see. If the winter is tough and supply does get short, the old basics of economics will kick in. Supply and demand will take a toll and a short supply and high demand will most likely result in higher prices.

So, as you feed the hay supply take note of how much is wasted. Using feeders to reduce waste is a good start. Hay rings have gone up, too. Hay rings that I purchased a year or two ago for under $200 are now $250 plus at most farm supply stores. Still they pay for themselves quickly when hay gets short and more expensive. For some reason it seems like cows waste more hay when the pile of bales gets low.

Another thought, as you feed hay this winter take the time to notice how much of the hay does not get to the hay ring or field where you are feeding. How much has rotted before you feed it. Hay that is stored inside will most likely see very little loss compared to bales stored outside. The use of string vs. net will also show a noticeable difference. While feeding bales with poly string or net is more time consuming because you need to remove it before feeding, in most cases more hay will make it to the ring compared to traditional twine that rots on the bottom of the bale.

Bales that are stored outside will vary in the amount of loss. Some of this we can’t control. The amount of rain is a factor and we sure can’t control that. Some other factors we can control. With a short hay supply this might be a good time to evaluate where you store your hay to reduce loss in future years. Observe and make note of where you see significant loss of stored hay.

Elevating the bales may be an option, but time consuming if placing bales on pallets. A better option may be to place bales on a pad formed with stone that is big enough to let the water get away from the bottom of the bales.

The last thing you want to do is place bales under the tree line at the edge of a field. The trees will NOT protect the bales from the rain but will shade them from the sun. The shaded part will stay wet much longer and result in more hay loss.

When storing hay these things may not seem to be as much of a problem as they might seem when you are feeding hay from an ever shrinking pile. Take note as you feed hay this winter. If any of these examples or thoughts match the way you store your hay look for possible ways to reduce your losses in storage in the coming year. Small changes may result in big savings.