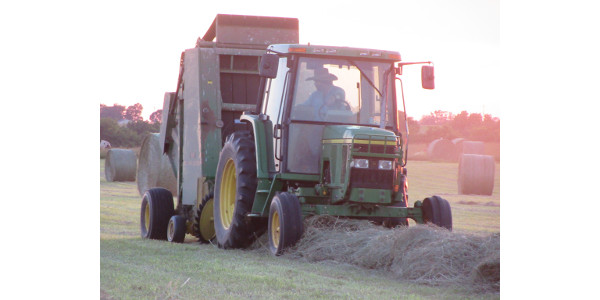 RFQ could be used in buying and selling hay. Missouri's weekly hay market report does reference RFV, not RFQ when they give alfalfa prices. (Photo credit: MU Extension)

MT. VERNON, Mo. — Any farmer that has had forage tested bought hay or entered a hay show, there is a chance they are familiar with the acronym, RFV. RFV stands for Relative Feed Value and is derived from the acid and neutral detergent fiber components of a forage (ADF and NDF).

Since 1987, those items have been put into an equation that gave forages a RFV that represented an objective measure of a forage’s relative feed value.

“Since then it has been used at Ozark Empire Fair hay shows as 60 percent of the forages’ final index. The other 40 percent of the index was based on a subjective evaluation by a person or persons,” said Eldon Cole, livestock specialist with University of Missouri Extension.

The subjective items include aroma, color, purity and condition.

A new system was tried this year at both shows using Relative Forage Quality (RFQ).

“The move was not made without a few years of deliberation and research,” said Cole. “A few other forage contests had made the switch and researchers consistently said RFQ was a better index value to use for overall nutritive value of hay and haylage.”

Organizers decided to use RFQ as the only evaluation criteria at the Ozark Empire Fair in 2017.

“When we looked back at results from over the years, using the index system, with both subjective and objective input, the forage with the highest RFV normally placed the highest in a class,” said Cole.

If RFQ was deemed to be superior to RFV as a predictor of energy, the RFQ use is appropriate for all forages except corn silage because RFQ does not account for differences in starch availability according to Cole.

RFQ does cost a little extra than the basic test with NDF which yields RFV. The RFQ evaluation uses TDN (total digestible nutrients) instead of digestible dry matter.

RFQ could be used in buying and selling hay. Missouri’s weekly hay market report does reference RFV, not RFQ when they give alfalfa prices.

“These calculations may not be perfect, but they can put more objectivity into hay pricing compared to simply quoting a price without a hay test,” said Cole.

For more information on this topic, contact any of these MU Extension agronomy specialists in southwest Missouri: Tim Schnakenberg in Stone County, (417) 357-6812; Jill Scheidt in Barton County, (417) 682-3579 and Sarah Kenyon in Howell County; or Eldon Cole, livestock specialist in Lawrence County at (417) 466-3102.