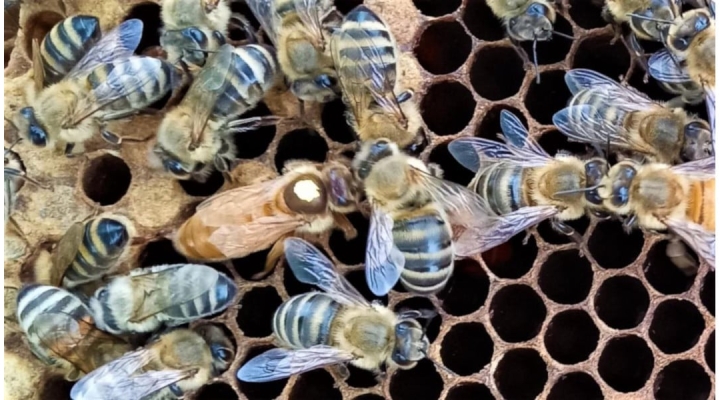 A hundred queens from Hilo, Hawaii, have arrived in the commonwealth just in time for National Pollinator Week in order to address a persistent problem. The Kentucky Queen Bee Breeders Association bought the queens (one is marked, above, with a white dot on its back) that have been bred in Hawaii to be resistant to a deadly honey bee pest, Varroa mites. (KQBBEA)

FRANKFORT, Ky. — A hundred queens from Hilo, Hawaii, have arrived in the commonwealth just in time for National Pollinator Week in order to address a persistent problem.

“These Hilo queen bees are different from other queen bees because they breed with drones (male bees) from hives that have not been treated for Varroa mites for several years,” State Apiarist Tammy Horn Potter said. “In introducing this stock to Kentucky, beekeepers hope that when these queen bees’ progeny (both drones and daughter-queens) mate, the genetics for tolerance will be passed on.”

Pesticides are not an optimal or sustainable solution for Varroa mites. “This is a first step away from using chemicals,” Potter said.

The Hilo Bee project is a public-private partnership developed with the U.S. Department of Agriculture; Project Apis m., which funds research and efforts to improve honey bee health and vitality; and Hawaii Island Honey Co. Through breeding, the partners have been working to develop a honey bee that is naturally Varroa resistant.

Mite levels during the critical treatment period in late summer were much lower in Hilo Bees. Only 9 percent of Hilo colonies were at or above the threshold for treatment (three mites per 100 bees), compared to 46 percent of standard colonies.

KQBBA bought the 100 Hilo queens for $2,800 and distributed them to its members across Kentucky. KQBBA is the first state beekeeper association to purchase that many queens for its members.

“A good cross-section of the commonwealth has received some of these queen bees,” Potter said. “We should know more about their performance in the fall and next spring.”

KQBBA is also attempting to strengthen the state’s honey bee population using genetics from other types of bees:

“The hope is that by propagating the genetic diversity around Kentucky,” Potter said, “beekeepers will have healthier and more productive hives.”

Bringing the farm to the city