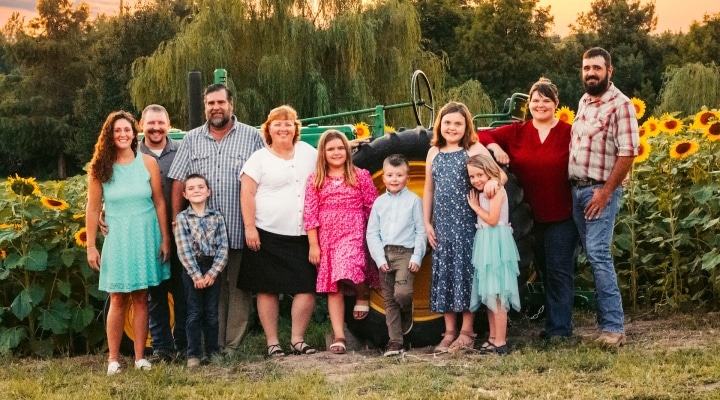 Show Me HH Farms of Hannibal is family-owned and operated. In addition to corn and soybean, the family grows sunflowers for sunflower seed oil production. (Courtesy Photo)

HANNIBAL, Mo. – A northeastern Missouri farm is making sunflower oil amid a global shortage linked to the Russian invasion of Ukraine.

Before the war, Ukraine and Russia supplied as much as 75% of the world’s supply of sunflower oil, according to William Meyers, emeritus professor of agriculture and applied economics at the University of Missouri’s Food and Agricultural Policy Research Institute.

Show Me HH owners Kent and Kathy Brown and their son and daughter-in-law, Phillip and Amberlyn, sell the oil at farmers markets, at their farm and at retail outlets. Their sunflower fields, open to the public when sunflowers are in full bloom, provide a striking backdrop for photos.

The response has been good, the Browns say. Customers like the oil’s mild, nutty flavor, says Amberlyn, especially in salad dressings and when sauteing. “When used at high temperatures, there is no distinguishable flavor, and that appeals to customers as well,” she says.

The Browns grow high-oleic sunflowers on 20 acres of their farm, which is otherwise dedicated primarily to traditional row crops. They harvest the sunflower heads using a combine with a special header. After harvest, in late October or early November, they clean and crush dried sunflower seeds. Seeds go into a press that squeezes out the oil. The Browns sell the separated waste for cattle feed.

The process is slow – about 10 hours for a 30-gallon drum of oil. The oil is black when first extracted and bottled. They rack it like wine to allow the dark parts to settle and clear.

A sunflower head is not a single flower but consists of many small ray flowers. The massive sunflower heads may contain up to 2,000 seeds. The oil content of the seeds is high – more than 40%.

High temperatures and dry weather made for plenty of sunshine at the farm this year, when the Browns nearly tripled their production of sunflowers on the same amount of acreage.

The sunflower is a native plant in Missouri. It was grown more than 1,000 years ago by the Cahokia mound builders in what is now the St. Louis area, says Rob Myers, adjunct associate professor and director of the Center for Regenerative Agriculture at MU. Myers says the first known commercial processing of sunflowers in the U.S. was in Missouri in 1926, when growers worked with the MU Engineering Experiment Station and the MU Department of Chemistry to process sunflower oilseed.

In Missouri, sunflowers can be planted from early April to July. The crop grows in a wide range of soils and tolerates drought.

The MU Extension publication “Sunflowers: A Versatile Native Crop” is available for free download at extension.missouri.edu/g4701. 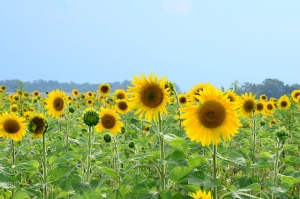 Sunflower: The story of this summer goddess begins with search for love

COLUMBIA, Mo. – The sunflower’s story begins with a tale of unrequited love. According to Greek mythology, the water nymph Clytie fell in love with the god of the sun, Apollo, who dazzled the earth as he drove his golden chariot across the sky each day. When he rejected Clytie’s affection, it nearly drove her […] 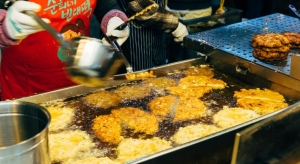 FARGO, N.D. — Many producers are wondering if their crops will make it to grain harvest or should they salvage the crop and harvest it as forage. “Sunflowers may be no exception to this question—the decision to harvest sunflowers as forage, particularly silage, requires careful consideration of several factors,” says Zac Carlson, North Dakota State […] 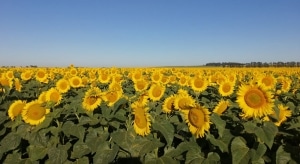 WASHINGTON — Sunflowers have many uses. They are used for floral arrangements, animal feed, biofuels, and even food for us. When grown commercially by farmers, the quality of sunflowers is based on the oil and protein concentrations in the seeds. Sunflower oil can be used for cooking and can be made into biofuels. The protein […]