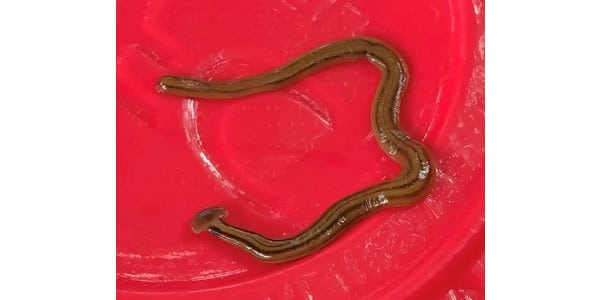 Not much is known about the hammerhead worm, which belongs to a family of flatworms called land planarians. (Courtesy of University of Missouri Extension)

COLUMBIA, Mo. — Some Missouri gardeners are finding a new type of flatworm in landscape soils.

The hammerhead worm is a “voracious, top-level predator,” says University of Missouri Extension horticulturist Kelly McGowan. “It will eat anything in its path,” she says. It primarily feeds on native earthworms.

Not much is known about the hammerhead worm, which belongs to a family of flatworms called land planarians. The worm gets its nickname from the blunt shape of its head. McGowan says its effect on soil fertility and nutrient cycling remains unknown. It is soft and flat and bears striping in different colors. It likes dark, cool, moist areas and moves and feeds mostly at night.

Not only is it deadly to earthworms, it leaves a nasty trail of mucus and excrement that helps it glide along. It produces sexually by laying eggs and asexually by fragmenting and growing new heads and tails when cut into pieces. McGowan says the hammerhead worm likely hitchhiked to Missouri in potted nursery plants.

It is small and difficult to see in potting soil but can grow to several inches long. McGowan suggests putting the soil in a wheelbarrow and looking for the flat worms. No known treatments exist, but gardeners can rid the soil of these predators by heating the soil to 93 degrees for five minutes. They survive freezing temperatures.

Its one good quality is that it preys on slugs. 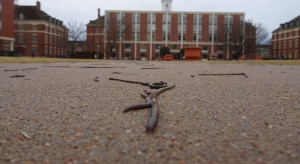 Jumping worms are real and a threat to the garden 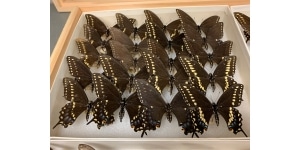 SPRINGFIELD, Mo. — University of Missouri Extension horticulturist Kelly McGowan is on the hunt for the elusive Ozark woodland swallowtail, a pollinator unique to the Ozark region of southern Missouri and northern Arkansas. McGowan works on a research project at the Roston Native Butterfly House at Springfield Botanical Gardens. She began scouting for the butterfly in […]

CORVALLIS, Ore. – Jumping worms, a not-so-nice pest that arrived in the United States in the 1920s as fishing bait and as hitchhikers on imported plants and soils, have vaulted into gardens and nurseries up and down the Willamette Valley corridor. Unlike beneficial earthworms and nightcrawlers that burrow deep tunnels in the soil, aerating and […]