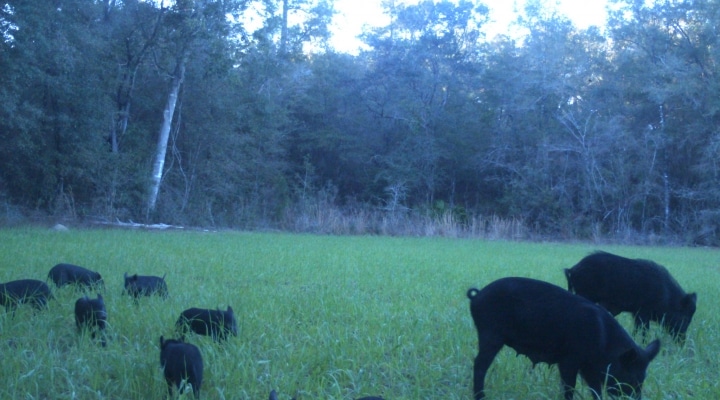 Feral hogs are one of the most damaging, invasive animals that you probably haven’t heard of. University of Delaware’s Center for Experimental and Applied Economics researcher Sean Ellis hadn’t heard about them either. But, after his economics research on these hogs and how to address the many problems they present, he’s unexpectedly become a hog expert. Along with UD’s Kent Messer, Ellis is a co-author of new feral hog research published this October in Applied Economic Perspectives and Policy. (photo by Florida Fish and Wildlife, Creative Commons/flickr.com)

NEWARK, Del. — Feral hogs are one of the most damaging, invasive animals that you probably haven’t heard of. University of Delaware’s Center for Experimental and Applied Economics researcher Sean Ellis hadn’t heard about them either. But, after his economics research on these hogs and how to address the many problems they present, he’s unexpectedly become a hog expert. Along with UD’s Kent Messer, Ellis is a co-author of new feral hog research published this October in Applied Economic Perspectives and Policy.

“Controlling feral hogs is very expensive. For farmers, it’s not just about the risk of what feral hogs can do to their property, it’s also about the costs of spending money to control them,” said Ellis, a postdoctoral researcher. “Most farmers are small business owners operating on a thin margin of profit. They have to be very smart about directing their resources to the most impactful areas of their business.”

Like many other invasive pests, these hogs run amuck due to a lack of natural predators to control the population. In the United States, they cost estimated $1.5 billion in damages and control costs annually. Genetically, feral hogs are a blend of domestic swine and the Eurasian wild boar; they’ve taken the strongest characteristics from each — thick fur, a strong sense of smell and superior intelligence — making them a prolific species. And the hogs are a carrier of more diseases than a typical wild animal, a topic of which the world is more cognizant than ever given the possible origins of the coronavirus (COVID-19). Now in the U.S. across 35 states, the problem has reached epidemic levels in states across the southeast and spreading north. Highly affected states are more vulnerable to transmission of exotic parasites from these hogs, which can have a dangerous effect on a human’s immune system.

Farmers, landowners and public land managers alike are working to combat populations of these swine; like a chain, efforts to stop their spread are only as strong as the weakest link. For example, if one landowner scares the hogs off her property, these resourceful pigs will move next door to another farm or public lands.

“There is very little economics research on this issue, but ultimately it’s an economic problem involving human behavior,” said Ellis. “Solving the problem requires coordinated community action, but the members of the community face varying levels of risk. The financial loss from feral hog damage and the opportunity cost of investing limited financial resources into solving this problem, instead of elsewhere.”

Controlling the hogs is not as simple as sending out hunting parties. Efforts to trap or shoot the wild hogs are often thwarted as these opportunistic omnivores are clever and adaptable. Groups of hogs, known as sounders, move across large areas. Once hunted, they learn to hide or lie still in the presence of humans. They also can become exclusively nocturnal and often change or expand their home range. Feral hog control is also difficult because of the species’ high fertility. A sounders’ size can double in four months. A pregnant sow can reproduce as early as six months of age, typically bearing four to twelve piglets per year.

And the hogs aren’t just staying put on rural lands. They’re making suburban communities home, especially across the South. While the hogs have reached central Pennsylvania, Delaware has, so far, been spared. From 2014 to 2018, the National Feral Swine Damage Management Program spent more than $1 million in the Keystone State to control the hogs in counties like Lancaster and York. But, given their prodigious birth rates, that doesn’t mean populations won’t rebound.

“Many parts of the country are becoming more suburban. That increases the number of interactions between feral hogs and people,” said Ellis. “Since they carry a lot of diseases and are physically large animals, that is a concern.”

So how can we stop the spread? Like we’ve seen in the fight against COVID-19, it takes a coordinated community effort. Ellis says farmers and public land managers must work in concert. Even if all area property owners work together, without a local feral hog control program, the hogs will retreat to safer areas like the deep woods or river bottoms, re-populate and come back as strong as before. Conversely, public land managers in highly affected areas have feral hog control programs, but the program cannot stop these animals without participation of surrounding landowners.

While new federal funding has recently become available for feral hog management through the 2018 Farm Bill, how best to spend this money is not well understood. This research is designed to help ensure that these funds are used in a manner that effectively addresses the problem.

One of the most effective methods of controlling feral hogs is a remotely operated trap. However, they come at a hefty cost. For their research, Ellis, Messer and their co-authors at Albany State University and Johns Hopkins University developed a cost-share program to see if they could increase adoption. Landowners could bid in actual auctions around the country for trapping systems that boasted remote monitoring and gate closure features. Included in the price of the trap was a year of cellular service for remote monitoring, as well as delivery, setup and training provided by a Jager Pro contractor.

“Our results show that landowners require substantial financial assistance when implementing control efforts with high upfront costs, such as remotely operated traps,” said Messer, S. Hallock du Pont Professor and director of the Center for Experimental and Applied Economics. “Some landowners may even require a financial incentive to use methods like trapping, as they ultimately cost money to maintain and operate. This research suggests that landowners are reluctant to invest in these traps, if they don’t believe that their neighbors will do their part in controlling the hogs.”

Through collaboration of researchers from UD, Albany State University, Johns Hopkins University, and the Center for Behavioral and Experimental Agri-Environmental Research (CBEAR), the study was funded by the U.S. Department of Agriculture National Institute of Food and Agriculture.

USDA to collect vegetable data in the Northeastern U.S.