Home » Gypsy moth treatment in Winona County
The Minnesota Department of Agriculture (MDA) is preparing to treat approximately 1,751 acres of land in Winona County to slow the spread of a gypsy moth infestation identified last year. (Jeffdelonge via Wikimedia)

ST. PAUL — The Minnesota Department of Agriculture (MDA) is preparing to treat approximately 1,751 acres of land in Winona County to slow the spread of a gypsy moth infestation identified last year. Officials will conduct the aerial treatment sometime between June 22 and June 29, beginning as early as 7:00 a.m. This date is dependent on weather conditions in the area leading up to the treatment date.

To help area citizens stay informed, the MDA has set up an Arrest the Pest information line at 1-888-545-MOTH (6684). The hotline will offer the latest details about treatment date and time.

The MDA maintains a monitoring program to watch for start-up infestations, and when an infestation is found, the department conducts aerial treatments of the infestation before it can spread. In 2016, the MDA found an infestation in New Hartford Township, Winona County (referred to as the Pine Creek block). (SEE MAP) Details of the area can be found at www.mda.state.mn.us/gmtreatments. 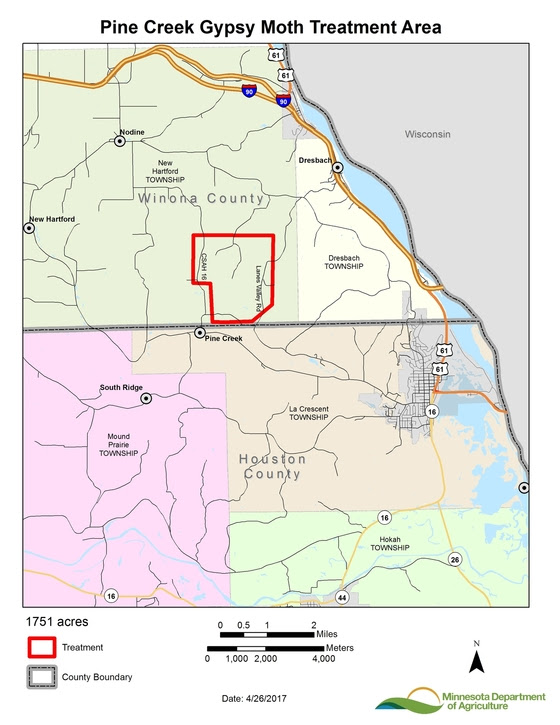 The MDA will use a method of mating disruption involving the aerial application of a waxy, food-grade substance containing pheromone that confuses male gypsy moths. This makes it difficult for the male gypsy moths to find females for mating, which means fewer caterpillars hatching and attacking trees next year. Application is timed just as adult moths emerge in mid-summer.

Mating disruption has been widely used for gypsy moth management in Minnesota and across the nation. It is an effective tool that helps slow the spread of the insect as it moves westward across the country. Minnesota has benefited greatly from the use of mating disruption in Wisconsin and other eastern states by keeping new gypsy moth populations at bay.

This work is being coordinated through the national Slow the Spread of Gypsy Moth program directed by the U.S. Forest Service. Minnesota has been part of this program since 2004. These efforts protect forest health, property values, and the state’s tourism industry.

Gypsy moths are among America’s most destructive tree pests, having caused millions of dollars in damage to Eastern forests. If present in large numbers, gypsy moth caterpillars can defoliate large sections of forest.

World Pork Expo one for the records