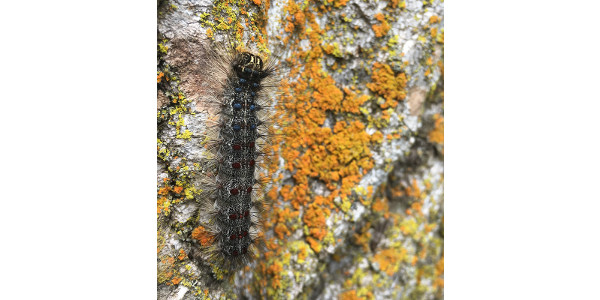 MADISON — The 2019 gypsy moth trapping season has ended and results are in: 52,396 moths were caught in 10,964 traps set in Wisconsin this summer as part of the Wisconsin Department of Agriculture, Trade and Consumer Protection’s (DATCP) Slow the Spread of gypsy moth program. In 2018, traps caught 76,447 moths and in 2017 traps caught 108,808 moths.

Trapping for gypsy moths is not used as a method of population control; it is a tracking and measuring tool. It shows where the moths are located and the extent of the population. Traps catch only male gypsy moths because the females do not fly.

Severe winter cold can kill gypsy moth eggs, especially when coupled with a lack of insulating snow cover. This decreases the number of caterpillars that hatch from egg masses the following spring and drives population sizes down.

“For the second straight year, there were several days of severe winter temperatures cold enough to kill gypsy moth eggs throughout Wisconsin,” said Michael Falk, trapping coordinator for the program. “These cold temperatures, in combination with our treatments, have helped decrease gypsy moth catches by about one-third since 2018, and one-half since 2017. However, moth populations can rebound quickly given the right environmental conditions.”

What You Can Do to Help Reduce Gypsy Moths

From now until spring, people can help reduce the population of caterpillars next year by treating or removing egg masses. They can be found on trees, vehicles, fences, playground equipment, buildings, or any outdoor item. A gypsy moth egg mass is tan, oval or bulb-shaped, and a little bigger than a quarter. It is flat with a velvety texture and can hold 500 to 1,000 eggs.

Egg masses can be removed with a putty knife, stiff brush or similar hand tool and placed into a container of warm, soapy water. Let soak for a few days and discard in the trash. Horticultural oil also can be sprayed onto egg masses. Simply crushing the egg masses will not destroy them.

The gypsy moth is an invasive pest from Europe that has been spreading westward since its introduction to North America in 1869. Gypsy moth caterpillars feed on the leaves of many species of trees and shrubs, especially oaks, and can cause severe defoliation when feeding in large numbers. As adult moths, the males concentrate on finding a female to mate. Females lay an egg mass, and then the moths die. Caterpillars then hatch the following spring, and the cycle begins again.

Webinar to give tips on marketing grains
August 3, 2020

NCDA&CS to treat gypsy moth infestations in seven counties
May 13, 2020