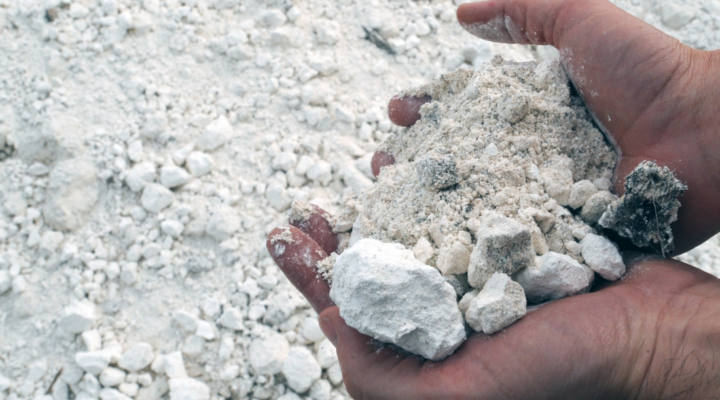 Gypsum is a natural mineral found in the earth. As an agricultural amendment, it has good amounts of calcium and sulfur and helps with soil stability. (Warren Dick, Courtesy Photo)

MADISON, Wis. — Warren Dick has worked with gypsum for more than two decades. You’d think he’d be an expert on drywall and plastering because both are made from gypsum. But the use of gypsum that Dick studies might be unfamiliar to you: on farmland.

“Gypsum is a good source of both calcium and sulfur, which crops need for good yields,” says Dick. “We also found that it improves many other soil characteristics. Gypsum helps soil better absorb water and reduces erosion. It also cuts down on phosphorus movement from soils to lakes and streams and improves the quality of various fruits and vegetables, among other benefits.”

Gypsum is a mineral that is naturally found concentrated in various places and can be mined out of the ground. But Dick’s research focuses on gypsum recovered from coal-fired electricity generating power plants.

Gypsum that comes from coal plants is called flue-gas desulfurization gypsum, as it comes from the process that ‘scrubs’ sulfur out of the smoke stacks to reduce air pollution. “The gypsum that is recovered has good quality,” says Dick. “The gypsum particles are small and uniform in size making them quite reactive. This can be a real benefit in agriculture. We also determined that it is safe for agricultural use through many studies. Reusing it for agricultural purposes, instead of putting it in landfills, provides multiple wins.”

Gypsum is high in both calcium and sulfur. In addition, the chemical formula of gypsum makes those nutrients more available to plants than some other common sources of these nutrients. Chemically speaking, gypsum is calcium sulfate. Its use is often confused with that of lime, which is calcium carbonate.

Gypsum will change soil pH very slightly, yet it can promote better root development of crops, especially in acid soils, even without a big pH change. This is because the gypsum counteracts the toxic effect of soluble aluminum on root development. Aluminum occurs naturally in soil and often isn’t a problem for crops. But when soil becomes acidic, the aluminum is available to plants — and it can stunt or kill them.

Another bonus of gypsum is that it is a moderately soluble mineral. This means the calcium can move further down into the soil than the calcium from lime (calcium carbonate). This can inhibit aluminum uptake at depth and promote deeper rooting of plants. When roots are more abundant and can grow deeper into the soil profile, they can take up more water and nutrients, even during the drier periods of a growing season.

Although moderately soluble, gypsum can be an excellent source of sulfur over several growing seasons. Research found that the sulfur is available not only in the year applied, but can continue to supply sulfur for one or two years after, depending on the initial application rate. Gypsum as a sulfur fertilizer has benefitted corn, soybean, canola, and alfalfa.

Gypsum can also help improve soil structure. Many of us look at soil as a uniform, static substance. In reality, soil is a mixture of inorganic particles, organic particles, and a complex mixture of pore spaces, water, and soil microbes. Its composition changes through weather events like rainstorms, by tillage, or as plants pull nutrients for growth. Farmers have to manage their soil well in order to maintain good crop yields year after year.

Improving soil structure helps farmers with some common agricultural problems. Adding gypsum to the soil reduces erosion by increasing the ability of soil to soak up water after precipitation, thus reducing runoff. Gypsum application also improves soil aeration and water percolation through the soil profile. A recent study showed the benefit of gypsum application to improve movement of water through the profile to tile drains. It also reduces phosphorus movement out of the field.

No matter what solutions farmers are trying to implement when using gypsum, they have several options for application. Of course, the type of application method will be determined by the reasons to use gypsum. Finely crushed gypsum can be dissolved in irrigation water and applied that way. Farmers can take gypsum and apply it to the topsoil prior to planting or right after harvest. It can also be applied to hay fields after hay cutting. If tilling is needed (again, dependent on the soil conditions), gypsum can be worked into the soil with the tilling equipment.

Although gypsum has been used in agriculture for more than 250 years, the benefits it provides are still being studied. In addition, the re-use of gypsum by-products from coal power plants reduces the need to mine gypsum from geologic deposits. It also saves landfill space. Gypsum can’t solve every agricultural problem, but it is a proven resource to add nutrients and improve soil structure.

“It’s a great example of recycling a waste product and using it in a beneficial way,” Dick says.

Dick, Professor Emeritus at The Ohio State University, presented “Crop and Environmental Benefits of Gypsum as a Soil Amendment” at the November 2018 meeting of the American Society of Agronomy and the Crop Science Society of America.