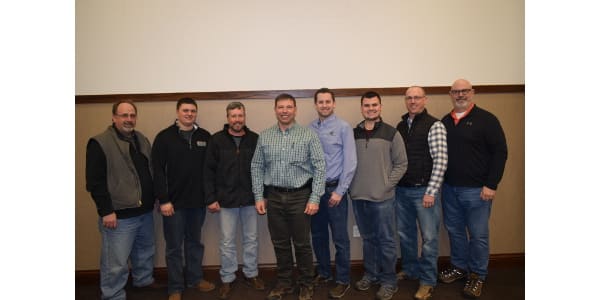 The WPVGA Associate Division Board of Directors re-elected Kenton Mehlberg of T.I.P., Inc./Ag Grow Solutions, Custer, to be its President for 2020. Mehlberg also served as President of the Board in 2019. The rest of the officers for 2020 include: Paul

Wilcox and Chris Brooks of Central Door Solutions, Plover, were incumbent Associate Division Board members who were re-elected to the Board for their second terms. Sally Suprise of Rural Mutual Insurance, who had filled in for a year upon the departure of a board member in 2019, was officially elected for her first term. In addition, Justin Yach of Compass Insurance Services, Stevens Point, was elected for his first time on the board, and Kristi Kulas, M3 Insurance, Madison, enters the second year of her first term. Yach was elected to replace Nick Laudenbach of Fencil Urethane Systems, Wisconsin Rapids, who completed his second term on the Board.

In addition to the three board officers, the other two WSPIA Board of Directors are Roy Gallenberg of Gallenberg Farms, Inc., Bryant, and Matt Mattek of J.W. Mattek & Sons, Inc., Deerbrook.