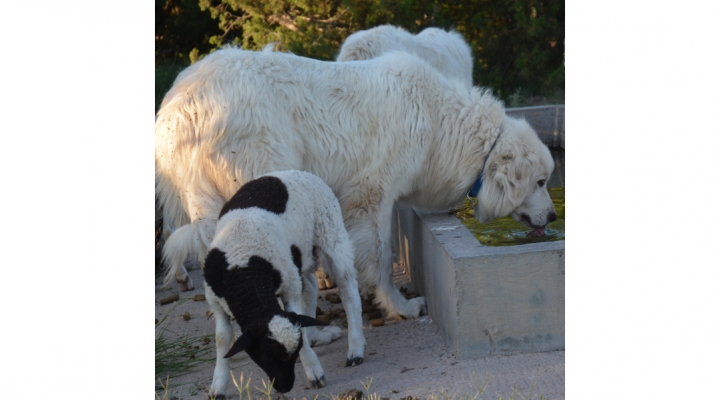 SAN ANGELO, Texas — The numbers are in from a yearlong experiment pitting 18 inexperienced young livestock guardian dogs and their neophyte dog-handling owners against a hoard of native sheep and goat predators ranging over thousands of West Texas acres.

“Predation is and always has been one of the most significant problems in the sheep and goat industry in Texas,” said Dr. Reid Redden, Texas A&M AgriLife Extension Service state sheep and goat specialist. “And the problem is getting worse.”

To see the complete results, go to http://sanangelo.tamu.edu/livestock-guardian-dogs/.

“It’s reported we lose somewhere between 10 and 20 percent of the lamb and kid crop annually in Texas to predators,” Redden said.

“Because of this significant loss, AgriLife is working with local ranchers to improve our understanding of livestock guardian dogs and their effectiveness in this part of Texas.”

In January 2016, six cooperating ranchers across West Texas agreed to take part in the experiment. None had any previous experience with livestock guardian dogs, but all had significant predator issues and operate large pastures ranging from 500 to 2,500 acres.

Each rancher received two to four livestock guardian dogs purchased from 5R Stock Dogs of Billings, Montana. The dogs were six to 12 months old at the start of the experiment and had been bonded with sheep.

Redden said livestock guardian dogs have been used for thousands of years in other parts of the world where sheep are herded, but less is known about how to use them or their effectiveness in sheep and goat producing West Texas. Some work was done in the 1980s in the area, but interest soon waned, possibly from lack of knowledge of the dogs.

Redden said livestock guardian dogs are not herding dogs, but rather stay within the proximity of their sheep and/or goat charges, thus creating an effective and constant predator deterrent.

Redden said unlike other parts of the sheep and goat producing areas in the U.S. and world, West Texas ranchers don’t often see their animals on a daily basis, meaning the dogs must rely on their own intuition and instinct to remain effective.

So were they effective?

“Half the ranchers reported the dogs were having a significant positive impact resulting in improved lamb crops within the first year,” Redden said. “Averaged across all the cooperating ranches, the livestock guardian dogs improved lamb crops by an estimated 25 percent.

However, the livestock guardian dogs were not foolproof. In the first year, two of the dogs went missing, three were removed for predating upon livestock, and four were relocated due to neighbor conflicts.

Tomeček used GPS-locating collars to track the dogs’ movements. The collars revealed the dogs traveled an average of 2.5 miles a day, with the distance ranging from a low of 1.5 miles to a high of 3.5 miles depending on the dog, pasture size and terrain.

“We also looked at the home range of the dogs, which was determined by where they spent 95 percent of their time, and found it to be about 600 acres per dog,” Tomeček said. “And depending on the dog and location, that ranged from 200 to 1,200 acres.”

Tomeček also noted home ranges were not always one large area, saying, “It can be two areas separated by a wide gap, or have holes in it…usually dependent on where livestock would or would not be on a particular ranch.”

He noted the dogs didn’t wear the collars all year long, and the collars were moved among the dogs.

“We were able to use one collar’s beacon on one place to find a ‘missing’ dog that ended up still being very much on the job. Some sheep had broken away from the flock and he had stayed with them.”

Tomeček said game cameras were used to monitor predators, and there was strong evidence pointing to a marked reduction in predator traffic through the pastures the dogs patrolled, but there was no significant impact on non-predatory wildlife traffic.

“So bottom line is, with this particular scenario — ranchers new to livestock guardian dogs coupled with young dogs on unfamiliar and often rugged country — this unlikely combination can be a useful tool. But not all dogs work out, so we plan to continue to increase our understanding through multiple projects we have planned here in San Angelo at the AgriLife center,” Redden said.