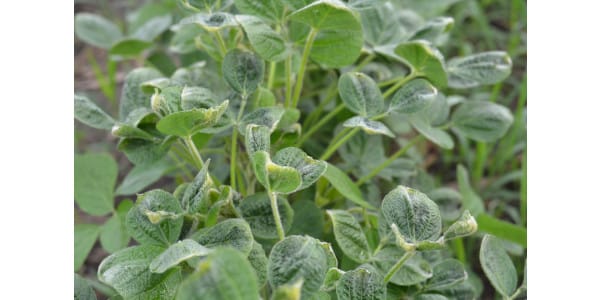 MINNEAPOLIS — Multiple herbicide-resistant soybeans such as XtendFlex (resistant to dicamba, glyphosate, and glufosinate) and Enlist E3 (resistant to 2,4-D choline, glyphosate, and glufosinate) have created the opportunity for post-emergence “over-the-top” application of growth regulators (dicamba and 2,4-D choline) to soybean. However, off-target damage to sensitive soybean from these herbicides is widespread in Minnesota and other soybean-producing states in the US.

In a recent episode of ‘Strategic Farming: Field Notes’ hosted by the University of Minnesota Extension, we discussed the symptoms of growth regulator herbicides (e.g., dicamba, and 2,4-D) injury on soybeans and potential causes. This article further addresses these topics.

How do I differentiate growth regulator injury from other herbicide injury?

‘Cupped and crinkled’ leaves are the symptoms of dicamba injury in non-dicamba resistant soybean. Upper trifoliates show most cupping following dicamba exposure and the tips of cupped leaves are often brown or cream in color. Depending on the level of exposure and weather conditions, it may take anywhere from hours to two weeks to develop these symptoms. Veins of affected leaves show parallel orientation instead of a net venation pattern. Height reduction and death of the apical meristem (growing point) are typical symptoms following higher rates of exposure.

The herbicide 2,4-D can cause leaf drooping and stem twisting of soybean within several hours of exposure. Other symptoms include leaf strapping and callus tissue formation on the soybean stem. Read more about the growth regulator injury symptoms in Differentiating 2,4-D and dicamba injury on soybean (PDF) from Purdue.

Residues of clopyralid (another growth regulator and the active ingredient in Stinger) in the soil may also cause carryover injury to soybean. The symptoms include axillary meristem release and cupping or leaf strapping, which can look very similar to the symptoms of other growth regulators, such as dicamba. Clopyralid does not metabolize in tissue and leaches into the soil as crop residues degrade. Clopyralid carryover is most common in coarse texture/low organic matter soils in a low rainfall situation.

Carryover injury from Group 27 or HPPD inhibitors (e.g., Callisto, and Laudis) can also mimic growth regulator injury (i.e., crinkling) to some extent; however, Group 27 injury can easily be detected with the chlorosis or bleaching of the leaf margins or the entire leaf.

Pre-emergence or post-emergence applications of Group 15 herbicides (e.g., Dual II Magnum, Warrant, or Outlook) can also cause soybean leaf injury. Heart-shaped leaves and crinkling towards the leaf margin are very common. Symptoms are usually visible on one or two trifoliates that come after herbicide application.

Glufosinate (Liberty), PPO inhibitors (Flexstar, or Cobra), and ammonium sulfate (AMS) DO NOT cause any leaf cupping.

What are the differences between physical drift, volatilization and temperature inversion?
What is “atmospheric loading” of dicamba?

Physical drift of spray particles to non-target areas causes crop damage. Symptoms usually occur at the edge of the field adjacent to the drift source, and the severity of damage decreases as the distance from the source increases. Proper application conditions and appropriate nozzle selection can decrease the proportion of drift-prone small droplets and reduce the chances of physical drift.

Volatilization or vapor drift occurs when a herbicide changes from a liquid state to a gas/vapor and the vapors move out of the treated field. All dicamba formulations are prone to volatilization, but some volatilize more than others. The high vapor pressure of dicamba, especially in hot temperatures, makes dicamba more volatile than other herbicides.

In 2021, the majority of dicamba was applied when the temperature was greater than 85 °F and in a dry environment in Minnesota, leading to large volatilization potential. The North Dakota Agricultural Weather Network (NDAWN) shows ‘Delta T’, which is a great decision-making tool for the pesticide applicators. The higher the Delta T values, the drier the atmosphere is with greater potential for volatilization. Symptoms caused by volatilization are uniform in a very large area (sometimes edge-to-edge in a non-dicamba resistant soybean field).

‘Atmospheric loading’ refers to pesticides lost to atmosphere following volatilization. These pesticides may remain aloft for hours or days and settle back to earth miles from their source. Dicamba is frequently mentioned in conversations about atmospheric loading due to its desire to volatilize, especially at high temperatures. Dicamba particles suspended in the atmosphere due to evaporation during the application process or through volatilization are prone to move based on atmospheric conditions such as wind, temperature, and rainfall events and potentially settle evenly over a field causing the observed leaf malformation.

What’s going on in my field?

The occurrence of whole fields with uniformly cupped leaves and no logical explanation of previous herbicides, tank contamination, or drift still leave many puzzled. These widespread issues with symptomology are consistent with dicamba exposure. It is impossible to know exactly how these particles arrived at each field, but it is likely that evaporation at the time of application, volatility, temperature inversions, and atmospheric loading resulted in these symptoms. It is also possible that the genetics of different varieties express the symptoms of dicamba exposure differently. However, there are still a lot of unknowns at this time.

What can we do to help growth regulator-damaged soybean to recover?

Growth regulator herbicide damage usually causes yield reduction in soybean; however, the yield loss potential depends on the severity of the injury and the soybean stages when it was exposed to the herbicides. Soybean injury during the reproductive phase is much more impactful on yield than injury during the early vegetative stages. Researchers from the University of Missouri recommended that weekly irrigation (if available) can help soybean recover following dicamba injury. In their experiment, the application of foliar fertilizers, urea, fungicides, and plant growth hormones didn’t help dicamba-damaged soybean to recover.

How do I report suspected off-target herbicide damage?

It is a violation of state and federal pesticide law to allow any pesticide to drift off-target. All pesticide applications must follow the instructions provided in the currently approved product labels. The Minnesota Department of Agriculture (MDA) can also help in answering questions, investigate formal complaints, enforce regulations, and assess penalties when deemed necessary. The MDA only investigates chemical misuse complaints that have been submitted in writing. Investigations include, but are not limited to document symptomology, collect records, and sample collection for laboratory analysis.

If you would like to discuss your complaint before filing a written complaint, contact the MDA at 651-201-6333 between 8:00 AM and 4:00 PM Monday-Friday. If you need to speak with someone about a Non-Emergency situation, after normal business hours, contact the Minnesota Duty Officer at 800-422-0798. If this is an Emergency, call 911.

Dicamba only: If your complaint alleges damage or other misuses from products that contain the new dicamba formulation, i.e. Engenia, Tavium, or XtendiMax, please use the Dicamba Complaint Form.

All other pesticide or fertilizer misuse: If your complaint DOES NOT allege damage or other misuse from products containing the new dicamba formulation and is not subject to the Groundwater Protection Rule, use the general Pesticide and Fertilizer Misuse Complaint Form.

To reduce any off-target movement of growth regulator herbicides, consult the label. Only Certified Applicators can legally purchase and use dicamba formulations on soybean because they are classified as “Restricted Use Pesticides” (RUP). The label has extensive and detailed requirements for recordkeeping and the applicator must create these records within 72 hours of the application. Finally, remember that avoiding spray drift at the application site is the responsibility of the applicators.

The EPA-approved “over-the-top” dicamba labels (approved in 2020) included a few additional measures to reduce off-target movement of this herbicide: 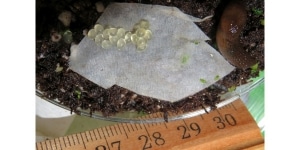