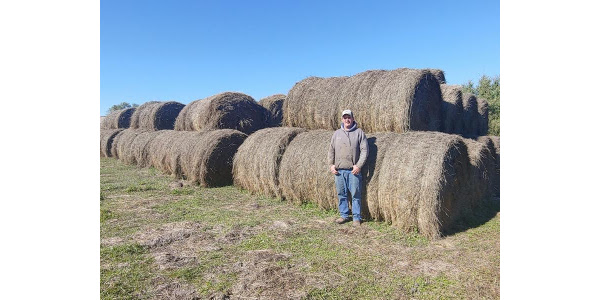 The 2017 drought forced Kolousek and his dad, Dick, to make some difficult decisions. Last summer they sold 100 cow/calf pairs to conserve forage, and this spring they sold 100 yearlings they had planned to finish. Thankfully, this June it began to rain. Although gentle rains every four days made haying difficult, Kolousek says no one was complaining. "We have an overabundance of feed now. Our first cutting of alfalfa produced three-times what it did last year. We put up more bales per acre than we ever had. It was amazing," Kolousek says. (Courtesy image)

HURON, S.D. — Listening to farmers and ranchers from across South Dakota report on growing season 2018 begins to sound like the children’s story, Goldilocks & The Three Bears – Too wet. Too dry. Just right.

However, due to input costs, rental rates and low crop and cattle markets, regardless of how Mother Nature treated farmers and ranchers, this harvest, no one gets a happily ever after.

“This growing season has a lot of different twists to it,” explains Tabor crop and cattle producer Terry Sestak. “Policy has not been good, as far as helping the ag sector markets.”

And at 62, the District 1 Farmers Union board member says although he’s farmed nearly all his life, he’s never seen a growing season quite this wet. “It’s been wet all growing season with really no dry spells to speak of in our area.”

Referencing southeast South Dakota, where days of rain delayed planting repeatedly, some fields never were planted and some that Sestak and his neighbors were able to plant ended up getting drowned out. As of Oct. 9, the rain has yet to quit.

“I am looking out the window at a field that was preventive planting, that I was going to plant winter wheat into. So, I had it sprayed to kill weeds. Then, a 6-and-a-quarter-inch rain the week of Sept. 17 interrupted my plans,” he says.

But, Sestak says he remains optimistic that 2019 will be a better year. “Farmers are eternal optimists. It’s good to keep a sense of humor and realize things could be much worse. I’m healthy. I have my family. And, we didn’t receive the type of flooding they got on the coasts. That type of flooding not only destroys crops, but homes and kills livestock.”

Craig Schaunaman echoes Sestak’s comments. “I put a quote on my fridge for my kids, ‘Your day starts with your attitude,'” says the fourth-generation Aberdeen crop producer. “In times like this, it’s challenging to be positive, but you gotta do it. You also have to be a realist and realistic about what is going on out there and deal with it.”

This summer, it was drought and markets that tested Schaunaman’s attitude. “By the Fourth of July, we had been in D2 or severe drought for five weeks – and it remained there for most of the growing season,” he says, explaining that from July 18 until Sept. 20 the area went more than 60 days without rain. “Obviously, whenever you get in a drought situation, and you have low commodity prices, it’s like you are getting doubled up on.”

But, at 59, 2018 isn’t Schaunaman’s first drought and he is determined to stay strong for the next generation. His son, Sam, 22, and nephew, Chad, 46, farm with him and his brother, Kirk.

“Sam has gone through some high prices and awfully good crops. Even some of our agronomists and seed salesmen, who are in their 20s, have never seen it not rain,” Schaunaman says. “So, I try to explain that although we are getting kicked in the shins on this one, it could be worse.”

Schaunaman adds that compared to other severe droughts he has experienced, because of advancements in seed technology and adoption of no-till practices, the yield impact was not as bad as he has seen it.

“You can certainly see the no-till advantage when you run into weather conditions like we have. And, better fertility, weed control and genetics mean crops are not out there competing,” says Schaunaman, who is estimating the drought reduced the farm’s yields by at least 30 percent.

In 2017, no-till practices helped Wessington Springs cattle rancher Scott Kolousek harvest a corn silage crop that didn’t receive rain until August. “The corn was no-tilled into wheat stubble and cover crop residue. It got waist high and quit growing, but it stayed alive. Then the first of August it started raining and it took off again. We had average corn last year.”

In comparison, a field nearby was planted into soybean stubble that had been strip tilled and the corn was dead by July 4.

The 2017 drought forced Kolousek and his dad, Dick, to make some difficult decisions. Last summer they sold 100 cow/calf pairs to conserve forage, and this spring they sold 100 yearlings they had planned to finish. Thankfully, fellow Farmers Union member, Salem farmer Jim Wahle donated his CRP acres to the Kolouseks to bale, so they had enough feed to get through the winter.

“We were still really dry this spring. The April blizzard dumped 2-feet of wet snow and it all soaked into the ground. There was no runoff.”

Then, this June it began to rain.

“I’d say we had an average amount of rainfall this growing season, and good timing of rainfall,” Kolousek says.

Although gentle rains every four days made haying difficult, Kolousek says no one was complaining.

“We have an overabundance of feed now. Our first cutting of alfalfa produced three-times what it did last year. We put up more bales per acre than we ever had. It was amazing,” Kolousek says.

But, even though Mother Nature favored central South Dakota this growing season, just like Sestak and Shaunaman, Kolousek says he won’t see a profit this fall.

“Compared to last year, it is easy to sleep at night because I know the cows will get fed. But, when you’re not making any money, it is still hard to sleep at night,” he explains. “Calf prices are OK. Crop prices are terrible and lease rates and input costs won’t come down.”

Prime rib from a petri dish?

Nebraska Corn Board urges farmers to be prepared
April 13, 2020