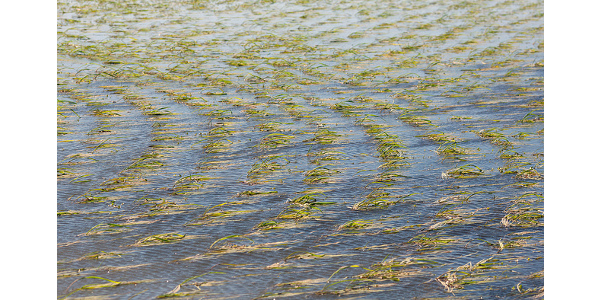 About 95 percent of rice grown in the United States is done in the warm California weather. (Robert Couse-Baker via Flickr)

MILWAUKEE (AP) — A Marquette University biology professor is researching the possibility of growing rice commercially in Wisconsin, despite the state’s seasonally cold temperatures.

About 95 percent of rice grown in the United States is done in the warm California weather. But drought that’s affected the West is raising questions about how the thirsty crop will be sustained.

“Why not (grow rice) here in Wisconsin? Why not in a place where we have ample resources of water? And we also have a lot of foggy land that farmers cannot use for wheat, soybean or corn,” he said.

Schlappi initially built four rice paddies on the roof of the university. He later moved the project to a Mequon Nature Preserve pond, where he connected with Hmong refugees who had experience growing rice.

“I had this vision many years ago when I came here that Asian rice could be grown here because I’ve seen it being done in northern Japan,” he said.

Schlappi is also working with the university’s business and communications department to find a market for Wisconsin rice.

“I can tell you anecdotally that I’ve been approached by local chefs who are really interested in using locally sourced foods, and rice is one of those foods that you can’t get locally in Wisconsin,” he said.
___
Information from: Wisconsin Public Radio, http://www.wpr.org