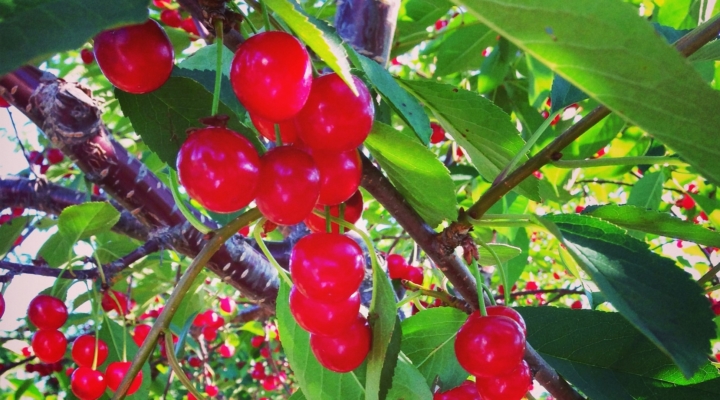 When it comes to Montmorency tart cherries, Michigan is the U.S. capital, producing more than 200 million pounds annually. Utah ranks second — albeit a distant one — averaging of about 30 million pounds of tart, or sour, cherries a year. (Meal Makeover Moms, Flickr/Creative Commons)

It happens like this: Two large pieces of farm equipment sidle up on either side of a tree laden with cherries.

The driver of the first vehicle — a hydraulic shaker — pushes a button and rattles the tree trunk loosening about 130 pounds of cherries from the branches and creating a mini-red rainstorm.

The catch frame on the other side of the tree collects the fallen fruit, moves it along a conveyor and then into a bin filled with cool water.

Once all the “picked” fruit is safely in the bin, the two vehicles inch forward to the next tree.

The process continues for three hot weeks each summer — usually from mid-July to early August. Crews work six days a week, 16 hours a day until all the cherries are collected for processing, said fruit farmer Ray Rowley.

It’s grueling work but exciting, too, he said during a recent tour of his 1,000-acre Cherry Hill Farms. “It’s what we do.”

While cherries are as American as pie and President George Washington, most people don’t even realize there are two types of cherries produced in the United States — sweet and tart.

About 97 percent of the sweet cherries are grown in Washington, California and Oregon and are sold fresh to consumers through grocery stores and markets.

When it comes to Montmorency tart cherries, Michigan is the U.S. capital, producing more than 200 million pounds annually. Utah ranks second — albeit a distant one — averaging of about 30 million pounds of tart, or sour, cherries a year.

Final numbers for the 2018 crop in Utah won’t be in for several weeks, but Rowley believes it’s a “good crop” but probably not a record.

Most of the Utah tart cherries are grown along the Utah County foothills in and around Payson and Santaquin, where the elevation, the climate and the soil combine to help the fruit trees thrive.

Eight family farms — including Rowley’s — produce most of Utah’s tart cherries; together they make up the Payson Fruit Growers cooperative.

Years ago, most of the Utah tart cherries were turned into pie filling. But, in the 1990s, the co-op perfected the process for drying and packaging cherries for use in granola, trail mixes and other snacks. A small amount still goes for canning or is turned into cherry juice or juice concentrate.

In recent years, the health industry has promoted dried cherries as a super food, and sales have soared. Studies have shown that dried tart cherries are high in antioxidants — two or three times higher than fresh sweet cherries. They also are one of the few fruits with natural melatonin, which researchers say may help regulate sleep and lessen inflammation.

During a recent tour of the harvesting process, organized by the Cherry Marketing Institute, Rowley said several things contributed to the health of the 2018 crop, including a mild spring without a late frost that often damages flowers.

Although, even when temperatures dip, Utah cherry farmers are ready to battle the weather — fighting off late frost with propane heaters and large fans that tower over the orchards.

There also is constant barrage of sea gulls, starlings and robins that feast on the fruit. “We can’t do anything about birds,” Rowley said, “we just let them have their share.”

Parts of Utah now top the nation in population growth, according recent U.S. Census estimates. The state’s strong birthrate and booming economy have made the Provo-Orem area one of the fastest-growing metropolitan areas in the country and increased the push to turn farmland into subdivisions.

“Land value here is high and everyone wants a house,” explained Payson fruit grower Mark Rowley, Ray’s cousin. “People just aren’t as farm-minded as they used to be.”

Because of suburban sprawl, farmers have started new orchards in outlying areas such as Tintic and Genola, anticipating that eventually the land will be gobbled up by development.

In recent years, tart cherry products from Turkey and Poland, the world’s leading cherry producers, have been flooding the U.S. market with low-priced fruit that undercuts U.S. producers, explained Matt Hargreaves with the Utah Farm Bureau.

He said cherry growers in Turkey receive subsidies from the European Union for the processing of tart cherries as well as from the Turkish government to pay for fuel, fertilizers and other costs.

Those subsidies, he said, allow growers to make a profit yet still sell their products in the U.S. at low prices. Turkey also has developing nation status, which allows products to flow into the U.S. without tariffs.

Consumers can avoid the imported fruit if they look for the name Montmorency, the U.S. tart cherry varietal, on products they buy. But they will pay more.

Right now, however, all the threats take a back seat while the cherries are harvested and trucked to the processing plant, where they are washed, pitted and frozen in white plastic buckets. The entire process, from tree to freezer, takes 12 hours, said Ray Rowley.

As orders for dried cherries come in throughout the year, the fruit is removed from the deep freeze, thawed and put through the drying process.

“As soon as the cherries are done,” he said, “we’ll be harvesting peaches and apples.”

That will keep the Rowleys busy until mid-November.