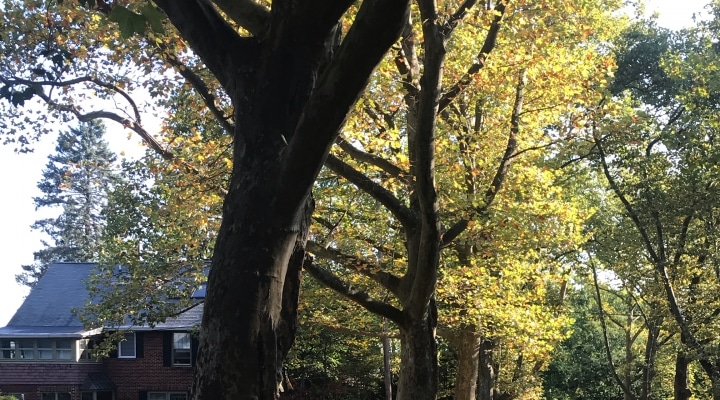 With prolonged, extremely hot and dry conditions in parts of the state, the leaves of some trees are coloring early or just turning to brown and falling off, such as these sycamores along a street in State College, Pennsylvania. (photo by MARC ABRAMS/PENN STATE)

UNIVERSITY PARK, Pa. — With little rain in the long-term weather forecast, a worsening drought in much of the Northeast portends trouble for Pennsylvania’s vaunted fall foliage display, according to a Penn State forest expert. At least in parts of the state.

“The drought is fairly extensive throughout the Northeast, but not in eastern Pennsylvania and southern New York,” said Marc Abrams, professor of forest ecology and physiology in Penn State’s College of Agricultural Sciences. “If this continues, there will be continued early coloration of trees, browning and leaf fall.”

Abrams — who for nearly four decades has studied how seasonal precipitation and temperature influence timing and intensity of fall colors in central Pennsylvania — often is asked by news media outlets each year to predict the quality of the pending autumn foliage display. This year he’s sounding an early warning that conditions are ominous for parts of the Northeast.

“It is hard to be optimistic for great fall coloration in the areas now under extreme drought because it has persisted for so long,” he said.

Leaf peepers should not despair just yet, Abrams advises, because there is a random element to fall colors that even scientists don’t fully understand. Sometimes, he explained, we get a great display even though climate conditions are less than ideal. “If, for some reason, precipitation does start to pick up, that will help.”

But obviously, Abrams pointed out, the trees that are having early color and dropping leaves now will not be foliated in mid-October, the normal peak color season. And there is a tree physiology aspect of the current situation that will detract from the display, as well.

“Some of the drought-tolerant trees — such as oaks — that are seemingly handling the drought OK are not among the great color producers,” he said. “One of the most famous trees for fall color is sugar maple, but unfortunately it is a drought-sensitive tree. That spells more trouble, especially in northern Pennsylvania, northern New York and New England. Even the fairly drought-hardy red maple is starting to color early and losing leaves in places.”

Each fall, according to Abrams, cooler temperatures signal deciduous trees to stop producing chlorophyll, the green pigment responsible for photosynthesis. The chlorophyll breaks down and disappears, unmasking other leaf pigments. These other pigments — called xanthophylls and carotenes — are what create the yellows and oranges seen in the leaves of yellow poplar, hickory, sycamore, honey locust, birch, beech and certain maples.

“One thing that I have been impressed with in my more than 30 years of gauging foliage is the resiliency of the display,” he said. “Year after year, despite conditions like this year’s drought, there are places where the trees show good color, but perhaps not great color.”

Gearing up for cover crops