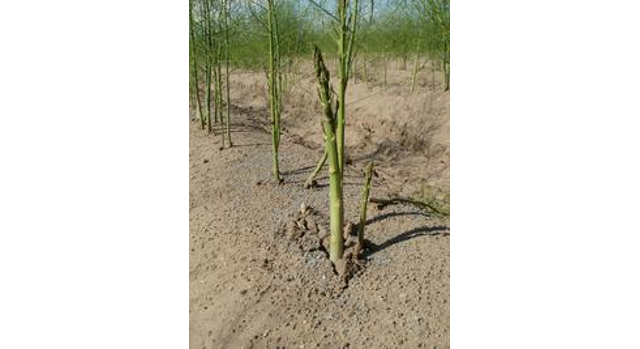 “Asparagus is not typically grown commercially in the South because of hot weather conditions and a limited harvest season,” said Garza. “This research showed that asparagus harvest in South Texas, and other warm areas in the region, can provide near year-round production.” (Southern SARE)

LYFORD, Texas — A south Texas producer, interested in increasing the diversity of crop production for local farmers, has found that asparagus can be grown in the Texas heat practically year-round by mimicking the “die-back” that occurs in the plants during dormancy in colder climates.

With a Southern Sustainable Agriculture Research & Education (SSARE) Producer Grant, Gilbert Garza with the Texas/Mexico Border Coalition, cut asparagus ferns below the soil surface every 10 months during the two-year trial, then pruned the ferns back every two months and harvested the spears to extend and maintain a continuous production of asparagus. The result: an asparagus crop that is viable for 10 months out of the year, with only two or three months of low production.

“Asparagus is not typically grown commercially in the South because of hot weather conditions and a limited harvest season,” said Garza. “This research showed that asparagus harvest in South Texas, and other warm areas in the region, can provide near year-round production.” In addition, Garza discovered that asparagus production can have two distinct seasons: a primary season that peaks from March through May, and a secondary season that peaks September through November.  Low production months include January and August.

Garza added that the crop was grown organically. No insecticides or herbicides were used during the project, and when the asparagus ferns were cut back, the only fertilization used was a two-inch layer of compost spread on the beds.

“Using this organic cultivation method, asparagus has the potential to be a successful alternative crop for small-scale producers in the South,” said Garza.

But while the research results challenge the common perception that warm conditions are not appropriate for asparagus commercial production, Garza emphasized that the 28-month research project did not continue long enough to determine the longer-term effects of a hot sub-tropical climate on asparagus production and plant longevity. More research is needed, he said.

—Southern Region of the Sustainable Agriculture Research and Education program 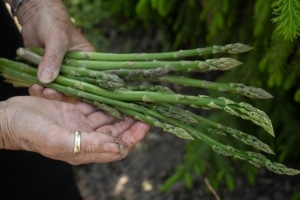 ELTOPIA, Wash. — Still reigning as the nation’s top producer, Washington State’s quality fresh asparagus crop is significant in both quality and quantity. Each April to June, Washington’s family farmers and packers work quickly to get the fresh, vibrant asparagus harvest to regional supermarkets, farmer’s markets and onto restaurant menus. In 2020, approximately 19.3 million […]

2018 Extension Cotton Specialist of the Year