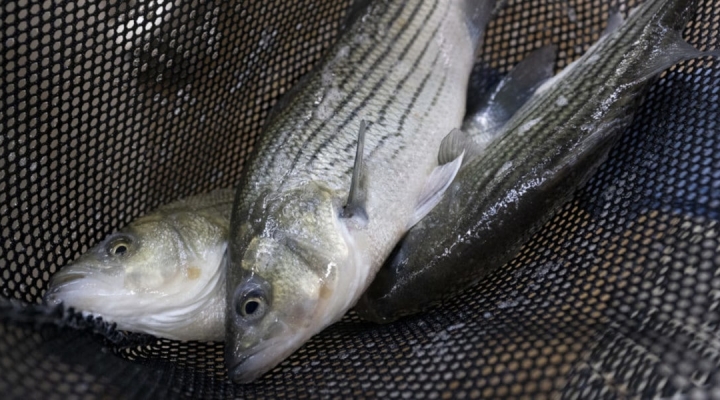 Fish at the Aquacultural Research and Teaching Facility are part of the grant-supported studies. (Texas A&M AgriLife photo by Laura McKenzie)

COLLEGE STATION, Texas — The U.S. is the top producer of hybrid striped bass, and a Texas A&M AgriLife team is working to improve the fishes’ health, growth and productivity by developing effective nutritional strategies to substitute fishmeal and other protein feedstuffs in the farmed bass diets.

Aquaculture is the fastest-growing agricultural enterprise in the world. The field is expected to continue growing to provide seafood for the world’s expanding population.

Some fish species produced in aquaculture, such as the omnivorous catfish and carps, consume diets without any fishmeal. However, more carnivorous species such as hybrid striped bass have traditionally been fed diets with a considerable amount of fishmeal, which is a very nutritious but costly marine feedstuff.

The U.S. Department of Agriculture National Institute of Food and Agriculture has awarded two grants totaling $1.15 million to the team’s studies of hybrid striped bass. The work will be led by Guoyao Wu, College of Agriculture and Life Sciences University Distinguished Professor and Texas A&M AgriLife Research Faculty Fellow in the Department of Animal Science at Texas A&M.

Teaming up with Wu on one study, “Biosynthesis and nutritional roles of glycine in hybrid striped bass,” is Delbert Gatlin, Regents Professor in the Department of Ecology and Conservation Biology, Bryan-College Station. On the second study, titled “Impact of dietary glutamate on the development of gut mucosal immunity in hybrid striped bass,” Wu will collaborate with Mike Criscitiello, Ph.D., professor of veterinary pathobiology and associate dean for research and graduate studies in the College of Veterinary Medicine and Biomedical Sciences.

Generally speaking, fishmeal and fish oil production are environmentally and ecologically sustainable, Gatlin said. Their production has not varied much over the past few decades, and both have rather good life cycle assessments compared to other feed resources..

“However, their supplies are limited, so as world aquaculture is projected to continue growing, the costs of these marine ingredients are expected to increase,” he said. “So, there will likely be greater need to substitute larger portions of fishmeal and fish oil in the diets of various fish species, especially the ones with more carnivorous natural feeding habits. Thus, our project should allow greater flexibility in formulating diets to meet the nutritional requirements of hybrid striped bass without relying on fishmeal or other feedstuffs.”

Wu said fishmeal has traditionally been used as the major protein feedstuff in hybrid striped bass diets, but because of the increasing demand and escalating costs, there is a growing interest in using plant proteins such as soybean meal to replace fishmeal in aquafoods. But success has been variable, he said.

“We found that glycine, the most abundant amino acid in the body of fish and fishmeal, is relatively low in plant proteins,” Wu said. “Based on results of our preliminary study, we believe that dietary glycine plays an important role in hybrid striped bass growth by maximizing protein synthesis, anti-oxidative capacity and creatine production in their tissues.”

Glutamate, the second most abundant amino acid in the body of fish and fishmeal, acts with glycine to promote metabolic processes. Collectively, the scientists believe both glutamate and glycine should be considered “functional amino acids” in animal nutrition.

Glutamate and glycine “are the cheapest amino acids, and yet hold great promise as cost-effective feed additives,” Wu said. “In addition, fish are excellent animal models to translate the basic research findings into the efficient production of high-quality animal protein for human consumption.”

Wu and Criscitiello said their study is a logical extension of their long-standing interest in amino acid nutrition and metabolism as well as immunological defenses of animals.

“These studies will not only provide crucial information for more effective aquaculture feeds, but they will also help elucidate fundamental interactions between mucosal nutrition and immunology that are conserved across vertebrates, from fish to mammals,” said Criscitiello. “This will help us understand how our gut immune system has evolved to manage beneficial microbiota while preventing infectious disease.”

Amino acids are the building blocks of proteins and also have other important biological functions, such as helping animals defend against infectious microbes. The mucosal tissues of the intestine serve as the natural barrier to defend the aquatic — and terrestrial — animals against harmful bacteria, parasites and viruses. Thus, the gut’s ability to resist the infectious agents outside the body is crucial for fish health and survival.

Glutamate is a precursor of glutathione, an abundant antioxidative substance, and a major metabolic fuel for the intestinal mucosa. So, glutamate is crucial for intestinal integrity and health. However, for over a century, glutamate had been regarded as a nutritionally nonessential amino acid in fish and other animals.

“Based on results of our preliminary study, we believe that dietary glutamate plays an important role in the development of the intestinal immune system in hybrid striped bass,” Wu said. “We expect glutamate to increase the production of anti-infectious and anti-oxidative molecules by immune cells in the intestinal mucosa of the fish.”

Additionally, he said, the ability of mucosal immune cells to use glutamate for energy production increases with age as the cells mature.

“Our findings will have a significant impact on U.S. aquaculture by generating new fundamental knowledge about glutamate in improving intestinal mucosal health and survival of hybrid striped bass,” Wu said. “The findings will also provide a new nutritional method for the use of glutamate as an adjuvant in vaccine development for the fish.”

Besides glutamate, fish also require a large amount of glycine for growth and health. And like glutamate, glycine had also long been regarded as a dispensable nutrient in animal diets.

However, Wu said, the supply of glycine in fish diets may have a crucial role in converting feed into body protein.

He and Gatlin will determine how glycine and creatine are synthesized in different fish tissues. This team will also study the roles of glutathione and creatine in mediating the effect of glycine in diet to improve growth, anti-oxidative responses, intestinal integrity, metabolic health and immunity in the hybrid striped bass.

Additionally, they will determine the role of the target of rapamycin, which is the master regulator of protein synthesis, and autophagy/proteasomes in mediating the effect of dietary glycine to promote protein synthesis and inhibit proteolysis in fish tissues.

“Skeletal muscle is the major site for creatine synthesis from glycine in hybrid striped bass,” Wu said. “Glycine activates the target of rapamycin cell-signaling pathway to promote protein synthesis in skeletal muscle, all while reducing intramuscular protein breakdown via the autophagy/proteasomes pathways. This promotes muscle growth.”