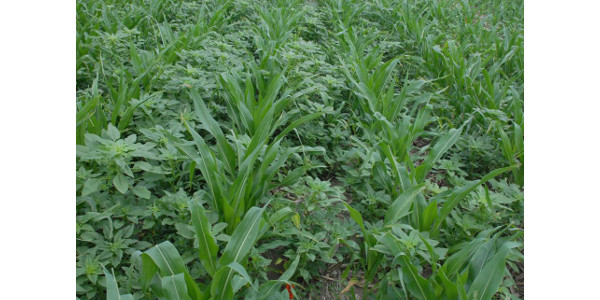 LINCOLN — This week several farmers contacted Nebraska Extension Weed Scientist Amit Jhala with questions about the reduced herbicide effectiveness they were seeing in some fields and whether it might be due to a new pesticide resistance. Following is one of the questions and Jhala’s response.

I applied .7 oz/acre Cadet plus 36 oz/acre of Roundup Powermax + 48 oz/acre Warrant to soybeans on June 8. The Palmer Amaranth did not die and is really growing fast. Presently the largest weeds are about 4 inches tall. Most are less than that. Most of it seemed unaffected by herbicide. The soybeans seemed to be burned more than the weeds. Palmer amaranth is the only weed present. I ran the pivot on .65 inch to activate Warrant, but dryland areas received no rainfall to activate the herbicide. The worst spots are at the ends of the field. I may just treat the borders with Ultra Blazer or Cobra and then rogue the larger part of the field if a few scattered ones show up. Any suggestions for the best control with least amount of damage to soybeans?

Glyphosate-resistant Palmer amaranth is difficult to control with post-emergence herbicides in Roundup Ready soybean. The only effective option now is to use additional PPO inhibitors such as Cobra, Marvel, or Ultra Blazer. Remember that they are also PPO-inhibitors and likely to cause some level of injury similar to what you have observed with Cadet.

What can be done to reduce seed production of Palmer amaranth?

What can be done next year?

When I sprayed the field with Cadet at .7 oz/acre and 15 gallons per acre of water with methylated seed oil for adjuvant, the Palmer amaranth was about 1-3 inches tall. I found very few that were controlled by the Cadet. Could they possibly be PPO-resistant as well? If Cadet didn’t do much too them, can I expect Cobra or Ultra Blazer to do significantly better?

Cadet is not a herbicide for Palmer amaranth control. Cadet can suppress some other pigweed species such as redroot pigweed and smooth pigweed when applied when the weeds are less than 2 inches tall. Cadet is very effective for velvetleaf control. We are working on a Palmer amaranth population collected from a field last year for possible PPO resistance. PPO-resistant Palmer has been confirmed in other states. However, a single application of Cadet at labeled rate does not make the population resistant because a number of factors can play a role at the field level.

Although Cadet, Cobra, and Ultra Blazer are PPO herbicides, their response might be different. No response of Palmer to glyphosate applied at a higher rate makes a relatively strong case of glyphosate resistance, but because Cadet was applied at labeled rate, it is too early to say whether the Palmer is PPO resistant.

Glyphosate-resistant Palmer amaranth has been confirmed in Nebraska and is now spreading rapidly. It would not be a surprise if your Palmer amaranth were resistant to glyphosate. If you have continuous control failure of Palmer amaranth with multiple application of PPO inhibitors, you can send us the seeds at the end of the season and we will conduct dose response studies to determine if your population is PPO resistant. (Contact information and mailing address for Amit Jhala)

To read previous CropWatch articles on related topics check out these Topic Tags: