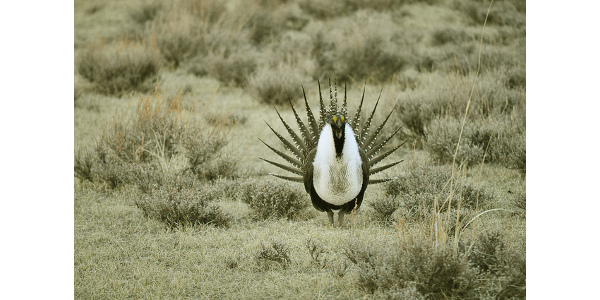 ARVADA, Colo. — U.S. Secretary of the Interior Ryan Zinke signed Secretarial Order 3353 to improve sage-grouse conservation and strengthen communication and collaboration between state and federal governments. “The Colorado Cattlemen’s Association (CCA); representing private, state and federal lands grazers affected by Greater Sage Grouse management, appreciates and supports the constructive review by the Department of the Interior for state and federal sage-grouse plans and programs,” said Tim Lehmann, CCA President.  Lehmann went on to say, “It is imperative that this review balance multiple uses of lands and not disproportionately abate or supplant regulatory restrictions on any one industry over another.”

Northwestern Colorado is located on the southern edge of Greater Sage Grouse range, but a high percentage of Sage-Grouse habitat in the state is considered a priority for conservation. The North Park and northwestern Colorado populations hold significant Sage-Grouse numbers and serve as an important connectivity zone linking populations in Utah and Wyoming. Sage-Grouse habitat is about evenly split between federal and private ownership.

The CCA strongly supports the engagement of stakeholders, states and local government in the Department of the Interior’s review.  It is CCA’s desire to see this approach enhance collaboration, and ultimately, partnerships that will benefit not only the Greater Sage Grouse, but Colorado’s economy and public-private partnerships.

A careful and engaged approach to reviewing the Bureau of Land Management’s Land Use Plans is prudent in order to facilitate focused amendments in the plans needed to balance and empower the multiple-use mandates of the agency, while affirming outcome-based management of the Greater Sage Grouse.

“The Colorado Cattlemen’s Association stands ready and willing to assist the state of Colorado and Department of the Interior throughout this constructive process.  Furthermore, CCA believes a science and outcome-based approach will benefit the Greater Sage Grouse, and that agriculture landowners are a critical key to the proliferation of the species and our economy,” stated Lehmann.

Variable-rate fertigation can be simple