The letter, signed by groups from 46 states, urged other Members of Congress to cosponsor the legislation to stop the mergers that threaten independent family farmers, consumers and communities. (Ron Cogswell, Flickr/Creative Commons)

The Food and Agribusiness Merger Moratorium and Antitrust Review Act of 2019 would initiate a moratorium on large agriculture, food and beverage manufacturing and grocery retail mergers to allow time to assess the impact corporate consolidation has on farmers, workers, consumers and communities. It also recommends improvements to antitrust enforcement. The bills were also introduced in the House and Senate in 2018.

“Over the past several decades, lax antitrust enforcement has greatly reduced competition in the industries that supply and buy from family farmers and ranchers, saddling them with higher input costs, fewer choices, and less innovation,” said National Farmers Union President Roger Johnson. “After a recent wave of agribusiness mega-mergers, Senator Booker and Representative Pocan’s legislation would provide a much-needed opportunity to evaluate the damage and establish stronger safeguards to prevent this level of consolidation in the future. We heartily support this merger moratorium, and we urge Congress to do so as well by passing it swiftly.”

The letter outlines the impacts of a merger and acquisition spree that has swept through food and agriculture in the last decade, with mergers between major seed, fertilizer, food processing and grocery retail giants. This wave of consolidation has contributed to falling farm prices, declining farm incomes, stagnant wages for food workers, rising food prices and economic stagnation in rural communities.

“OCM is proud to stand with over 200 organizations calling on Congress to hit the pause button on agriculture, food and retail concentration. With as much as 82 percent of agriculture markets controlled by four transnational corporations, farmers and rural communities are being preyed upon by these global giants and their opportunity for prosperity is being ripped from them,” said Joe Maxwell, Executive Director of the Organization for Competitive Markets. “With many of the recent agriculture mergers happening between foreign interests, this is not only an economic issue but a food security issue as well.”

The Booker-Pocan bill would put a strategic pause on merger combinations of over $160 million in sales or assets and establish a commission to study the impacts of consolidation in the food and agricultural sectors on farmers, rural communities, workers and consumers. The commission would also recommend any necessary changes to federal antitrust statutes or other laws and regulations to restore a fair and competitive agricultural marketplace.

“Smaller-scale and historically disadvantaged farmers who have long depended on livestock to sustain their diverse operations face disproportionate challenges marketing their products at fair prices in an increasingly concentrated agribusiness dominated market,” said Lorette Picciano, Executive Director of the Rural Coalition. “Mega-mergers are the prime driver of the downward spiral in income, wages and working conditions for this sector of producers as well as farm and food chain workers, and small businesses that erodes rural economic vitality and ecological health, and pits workers and communities against each other to survive. It is long past time for policy makers to provide them the time and statutory tools they need to build the futures they want.”

The letter, signed by groups from 46 states, urged other Members of Congress to cosponsor the legislation to stop the mergers that threaten independent family farmers, consumers and communities.

“For too long, corporate consolidation in the food and agriculture sectors has been ignored despite alarms raised by family farmers and rural communities of the negative, anti-democratic impacts of this trend,” said Jim Goodman, Board President of the National Family Farm Coalition. “Corporate domination of our rural economies and agricultural markets has undercut independent producers, exploited the workers who grow and process our food, forced rural businesses to close, and degraded our ecosystems. We are encouraged by the leadership of Senator Booker and Representative Pocan in bringing attention to this issue and taking a first step toward protecting the viability of small and mid-scale family farmers and local food systems.”

A copy of the letter is available here. 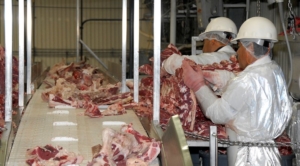 WASHINGTON, D.C. — This week, Representative Ro Khanna (D-CA) and Senator Cory Booker (D-NJ) reintroduced legislation to create a level playing field for independent family farmers and transform the broken system built by multi-national meatpacking companies. The Farm System Reform Act would, among other things, strengthen the Packers & Stockyards Act to crack down on […]