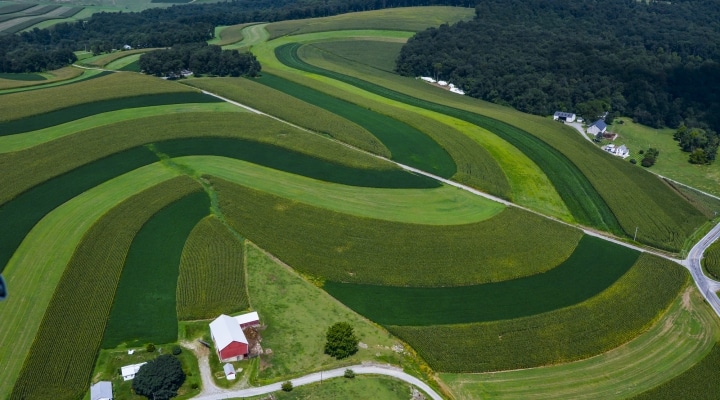 Farmers and other conservationists are applauding legislation in the state Senate that will offer financial support that farmers in Pennsylvania want and need in order to keep soil on the land, reduce runoff into local streams, and protect their long-term viability. (photo by CBF)

HARRISBURG, Pa. — Farmers and other conservationists are applauding legislation in the state Senate that will offer financial support that farmers in Pennsylvania want and need in order to keep soil on the land, reduce runoff into local streams, and protect their long-term viability.

“Agriculture is looked to for significant reductions to meet pollution reduction goals for the Chesapeake Bay and other major watersheds in the state,” Senator Yaw said. “Nevertheless, almost one-third of our Commonwealth’s streams do not meet standards for drinking, fishing or recreation, and agriculture remains one of the largest sources of impairment. To meet the challenges, I have again introduced legislation to establish an Agricultural Conservation Assistance Program.”

Senator Yaw is Majority Chair of the Senate Environmental Resources and Energy Committee. Senate Bill 465 was referred to the Senate Agriculture and Rural Affairs Committee.

“Farmers are willing to do the right thing and conservation districts are standing by to help. But both lack the resources. We thank Senator Yaw for an important first step,” said Shannon Gority, CBF Executive Director in Pennsylvania. “Everyone wants agriculture to succeed, and it is long past time that it gets the resources and technical assistance to finish the job. Our economy, health, heritage, and quality of life depend on it.”

“Pennsylvania farmers have a history of making investments in conservation, because they need healthy soil and clean water to run their farms,” said Rick Ebert, President of Pennsylvania Farm Bureau. “However, farmers know that there is more that can be done to improve conservation. Senate Bill 465 will help farmers implement those conservation practices that have a proven record of improving local water quality.”

“Agricultural water quality has been a priority issue in Pennsylvania and our college for many years,” said Rick Roush, Dean of the Penn State College of Agricultural Sciences. “We enjoy long-standing relationships with diverse agricultural and conservation associations that share our passion for this issue. We believe arming Pennsylvania farmers with the latest science-based information, best practices, and technical support in their conservation efforts will reap huge dividends for healthy rivers, but also for farmers in making better use of soil and nutrients.”

The Pennsylvania Department of Environmental Protection’s latest report lists 25,400 miles of Pennsylvania waters as being impaired, an increase of 5,500 miles in a four-year period. Agriculture runoff is the source of 5,700 miles of impaired waters.

Farmers in the Keystone State have shown they are willing to invest their time, land, and effort to restore and protect local rivers and streams, but they cannot pay for it all themselves. ACAP is the agricultural cost-share program Pennsylvania sorely needs to get the Commonwealth back on track toward meeting its clean water goals.

In ACAP, funding would be prioritized for counties based on factors like the amount of crop acres and livestock near streams impaired by agriculture.

Conservation districts would be required to invest in and approve pollution reduction measures that might include cover crops, streamside trees and more, and devise criteria for which ones will have the most immediate impact on local water quality. Districts would work with farmers and landowners to ensure that conservation practices are installed properly and functioning as designed.

ACAP would authorize a broad spectrum of funding sources to support the program, including state dollars, federal allocations, grants, and private enterprise investments.

The concept of ACAP is modeled after the state’s Dirt and Gravel Road program, in which funding is allocated to conservation districts based on a formula that factors in miles of unpaved road and proximity to high-quality streams. It focuses targeted dollars to areas with the greatest need, not through a one-size-fits-all approach. The Dirt and Gravel Road program is funded annually through a gas tax and allocated by the State Conservation Commission.

Stability of the food supply a huge factor in COVID vaccinations for ag workers
April 5, 2021