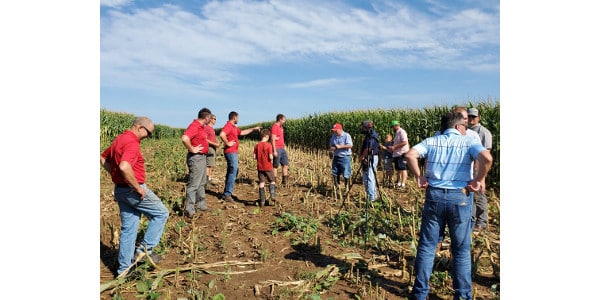 MOUNT CALVARY, Wis. — Over an inch of rain fell hours before a Sheboygan River Progressive Farmers (SRPF) field day opened to sunny skies for committed farmers to join in a discussion about interseeding soybeans into corn as a cover crop.

Brothers Joe and Mark Loehr, who are charter members of the farmer-led watershed conservation group, hosted the Aug. 28 event in one of their fields for 16 attendees, including farmers and ag business professionals.

“We have a big challenge as dairy farms to help the soil and grow the most productive crops,” said Joe Loehr, whose farm, Loehr Dairy, milks 500 cows. “The crops also need to have a certain nutrient profile for the cows to make high-quality milk. Digestibility of the plant and how we store it makes a difference in the end and that is why we go with the longer, more mature soybean so the plant isn’t drying out when we need to harvest the corn for silage.”

The Loehrs explained how in past years their corn silage tested poorer than this year.

Along with making the corn silage more nutritious for the cows, the added benefit of having a soybean cover crop is the root structure, which leads to healthier soil and keeps the soil and nutrients in place. Parts of the Loehr’s fields have lower elevation and are susceptible to runoff. Among other benefits, cover crops also help prevent nutrients from leaching into groundwater. An important part of SRPF’s mission is to use innovative practices that protect the environment.

The soybean cover crop mix has cow peas, chickpeas, forest peas, crimson clover, rape seed, sunflowers and soybeans. Mark Loehr said the research they did before choosing the mix is paying off.

“We found we were having to apply more and more nitrogen because our (nearly 1,000) acres have a lot of corn because we need the silage,” Mark Loehr said. “We wanted the benefits of the soybeans and the nitrogen it provides.”

Last year, the brothers tried planting cereal rye as a cover crop with their corn but noticed that with 22-inch rows the canopy of the corn hurt the rye, which at harvest time was yellow and burnt from not getting enough sunlight and moisture.

“We have combined the corn with the soybeans as a cover crop and haven’t had any issues,” Mark Loehr said.”

The Loehrs planted 20-25 pounds of soybean cover crop mix per acre and they plan to continue to expand the number of acres.