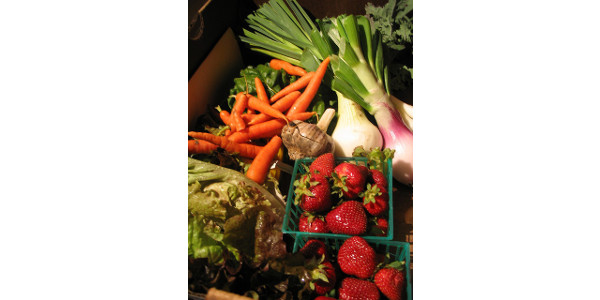 IOWA CITY, Iowa (AP) — When University of Iowa Housing and Dining retail chef Michael Graham wants to order 250 pounds of locally grown red onions for a week’s worth of food for the cafes and marketplaces across campus, he doesn’t have to search for farmers who can meet that need. He just contacts the Field to Family Food Hub.

There, food hub manager Giselle Bruskewitz takes his order, along with orders from institutions like local schools, nursing homes, food banks and restaurants. Then she reaches out to a network of Eastern Iowa farmers, all within 100 miles. Within a day or two, the food is delivered — from farm to table.

“It makes it a lot more realistic for us to do this. That kind of procurement takes a lot of time and a lot of effort,” Graham told The Cedar Rapids Gazette . “The food hub bridges that gap.”

The food hub had its official grand opening Oct. 3 but quietly kicked off last December, when Bruskewitz met with farmers. The nonprofit Field to Family, based in Iowa City, focuses on access to local foods and is funding the food hub through grants, donations and support from the Johnson County Board of Supervisors, the city of Iowa City and other entities.

The goal: to connect local farmers with entities, such as the UI, that want to buy their food. The food hub handles invoicing, delivery, food safety standards and customer communication.

“Whatever barriers exist for small-scale, diversified growers, we want to help them overcome those barriers to getting into the market,” Bruskewitz said.

Field to Family shares its small food hub building on Iowa City’s south side with another nonprofit, Table to Table, which also loans use of its fleet of vans when needed. For the food hub, Field to Family purchased a refrigerated truck and built two walk-in coolers outside the building and dry storage inside. For now, the organization focuses on produce but hopes to expand to products such as yogurt, dried beans, honey and maple syrup.

Between 1,000 and 5,000 pounds of food moved through the hub each week this past summer. This first year, the organization worked with 24 farmers and 22 customers. For now, most of the customers are in the Iowa City-Cedar Rapids metro area, but it hopes to expand across Eastern Iowa. Organizers are seeking more customers and more farmers; either can email foodhub@fieldtofamily.org or call (319) 855-2649 to learn more.

As much of this season’s fresh produce is winding down, Bruskewitz is busy reaching out to customers about what they will want to buy in 2020. This first year has been a learning curve, she said, about the needs different customers have. Some nursing homes, for example, want only seedless watermelons because of choking concerns. Other kitchens have processing issues — peeling large quantities of butternut squash could be a challenge, for example.

In December, she’ll meet with farmers so they can plant accordingly. The goal is to take some of the guesswork and risk out of the equation, so farmers know there will be a market for their products.

The food hub is an extension of work Field to Family already was doing through its Farm to School project. It partners with the Iowa City school district to facilitate local food purchases for school lunches. In 2011, the year the Iowa City chapter started, the district bought just under 1,400 pounds of locally grown food. In 2018, that had grown to 22,098 pounds. This year, the district ordered about 400 pints of cherry tomatoes every week during August and September. Most of that order was filled by Friendly Farm in Iowa City, brokered through the food hub.

“The food hub streamlines a lot of the process for us. They save us time; we don’t have to go and talk with so many farmers to come up with the volume we need,” Graham said.

The UI does have direct relationships with some local growers, such as Wilson’s Orchard, which has supplied the university with apples for years. But finding different farms for each of the vegetables needed, in the large amounts required, would be challenging.

“It makes the vendor process a whole lot easier,” Graham said. “We have one vendor; they bring it to us in a refrigerated truck, and it’s all good.”

When local vegetables are not in season or not available, the UI orders through a distributor, Cedar Falls-based Martin Bros. Those vegetables also are good, Graham said, but having been shipped from far-away places like California or Mexico, don’t have the shelf life of local produce.

“The quality is the biggest thing. It’s literally a day and a half out of the field when we get it. The shelf life is much better,” he said.

He said students also have made local food a priority, voiced through the Residential Dining Advisory Committee, which meets monthly.

“The students that dine with us — that’s something they value, and we get a great response from that. Anything we can do that’s local, our customers love it,” he said.

For farmers Emma and Marcus Johnson, and Emma’s parents Vern and Mary Zahradnik, profits don’t come from their 55 acres of corn and soybeans. Their business centers on the 12 acres of apples and a few acres of potatoes and other produce they grow at Buffalo Ridge Orchard in Central City,

It is the apples and produce that makes the farm sustainable, and since 2003, they’ve been slowly expanding them into the row crops, a few acres at a time. They now have about 4,800 trees.

“Row crops need so many acres to be profitable. We needed to diversify what crops we were producing,” Marcus Johnson said. “Corn and soybeans mainly just cover their costs, with little profit.”

Selling apples and vegetables takes more work, however. They drive to farmers markets in Cedar Rapids, Marion, Hiawatha, Iowa City and Dubuque, have a community-supported agriculture operation for vegetables and another for apples, and just added a farm stand that will be open through November. To expand their market, they try to find wholesale customers that fit into their delivery routes.

Working with the food hub allows them to expand their footprint.

“The food hub helps us reach a larger community,” Johnson said. “They’re reaching out to customers we aren’t able to reach. They have a connection with local schools and other restaurants. They’re just part of the food community that we’re not in touch with.”

The farm still is a small operation, with the family plus two to four part-time employees, depending on the season. But sales have increased enough this year, between increased direct orders and through the food hub, that Johnson sometimes has to make two trips to Iowa City instead of one — the demand won’t fit all at once in the delivery van.

“I think it’s a good thing for the local community and the food community,” he said. “We’re trying to make it sustainable. We’re able to pay our bills and pay ourselves a salary, and we’re happy to be able to hire people, even if they’re just part-time so far. Even big farms can’t always do that.”