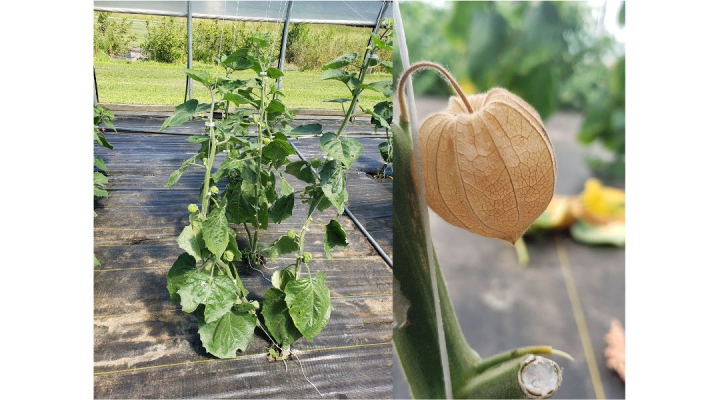 The farmer-driven NNYADP funded the research conducted by Cornell University and Cooperative Extension vegetable specialists at a commercial greenhouse in Essex, New York, and under the high tunnels at the Willsboro Research Farm at Willsboro, New York. The complete project report with production and harvesting data and costs and a video are posted at www.nnyagdev.org.

Ground cherry (Physalis pruinosa) and goldenberry (Physalis peruviana) are warm season annual crops that yield a yellow fruit popular as a healthy snack food. Golden cherry is currently grown and sold by farms in northern New York. It grows close to the ground and drops its fruit when ripe, making harvest labor-intensive. Goldenberry grows upright, is harvested by picking, and is being evaluated as a new crop for growers in northern New York.

The research team started ground cherry and goldenberry, with seed from the Boyce Thompson Institute, in a commercial greenhouse in Essex, New York, in March 2019. The plants were transplanted into an unheated high tunnel at the Willsboro farm in May.

The ground cherry demonstration project grew the low-growing crop without any trellising support. The research team used a harvesting frame built of aluminum pipe and cut flower support netting by Willsboro Farm Manager Michael H. Davis, Ph.D., to efficiently gather ground cherry fruit. A video of this trial is posted under NNY Farm Videos on the NNYADP website at www.nnyagdev.org.

For the goldenberry trial in the high tunnel at the Willsboro farm, the research team applied four treatments, including those studied in an earlier NNYADP-funded cherry tomato production trial: single leader, double leader, and stake-and-weave trellising, and untrellised.

“These unrealistic prices reflect only the recovery of the expense of trellising and not the cost of seeds, potting soil, greenhouse space, or the time to remove the fruit from its husk and sort the goldenberries to determine marketability,” Hodgdon noted.

Serious pressure from multiple pests was also problematic with this trial.

Will the researcher try again with goldenberry?

“If goldenberry is to be come a viable crop for New York State, more research and development are needed to determine any opportunity to reduce costs, identify shorter season varieties, and improve pest management, particularly for the Heliothis moth that burrowed into the fruit in the trial,” said Hodgdon.

Goldenberry pest resistance and varietal difference research continues at Cornell University studies are underway at the Boyce Thompson Institute. New varieties may allow goldenberry to be a more viable crop for northern New York in the future.